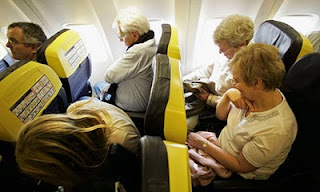 Plans by Ryanair to introduce standing room on its aircraft will not happen for at least two years and may never materialise if the airline fails to meet stringent European safety requirements.

The budget airline's boss, Michael O'Leary, will talk about his plans to replace 10 rows of seats with a standing area as well as introducing a coin-operated toilet on some planes in an interview on ITV's How to Beat the Budget Airlines tonight.

However, safety officials at the European Aviation Safety Agency (Easa), which regulates safety issues on European airlines, said its rules would have to be ripped up and rewritten in order to allow standing room on Ryanair flights. In Easa's certification specifications it states: "A seat (or berth for a non-ambulant person) must be provided for each occupant who has reached his or her second birthday."

"This idea [of Ryanair's] is unprecedented and unlikely to be certified in the near future," said a spokesman for Easa. The Civil Aviation Authority, which regulates UK but not Irish airlines, added that Easa's safety requirements were "quite stringent" and include rules on restraint during take-off and landing; restraint during periods of turbulence; the "crashworthiness" of airline seats; the ability of the seating to withstand a certain amount of gravitational force; and evacuation and flammability issues.

Ryanair itself admits both ideas – for standing room and paid-for toilets – were in the "very early stages". It first mooted the plans a few months ago when it was in talks with Boeing over a new order for planes. The order didn't come off, said a spokesman for the airline, but it is now in talks with the aircraft manufacturer over the idea again.

"We are aiming at starting safety testing in about 12 months with a view to going into service with the new arrangements in about 18 months to two years' time," he said. "We think this would work well on our winter services so would hope to eventually introduce it for a winter timetable."

Toilet charges would be introduced at the same time as the standing area, as the idea to charge £1 for using the lavatory only came about after the airline started to look at how to introduce standing room. It wants to remove both toilets from the back of the plane as well as a row of seats in order to go ahead with its plans. "This means we'll only have one loo left at the front of the plane and so clearly we need to discourage overuse, hence the charge," he said.

The refitted planes would only run on commuter routes of under one hour to start with, such as London to Dublin, although O'Leary hopes to introduce standing room on some longer flights at a later point. A certain percentage of the standing slots will be free to passengers and the others charged at €5 to €10 (£4 to £8).

Ryanair defended itself against accusations that the two ideas are nothing more than an attempt to seek publicity.

"People are always slow to accept the changes that face the aviation industry, even though it is already almost unrecognisable from 20 to 30 years ago," said a spokesman for the airline. "We have already done away with check-in desks, an idea that two years ago people dismissed as a joke. We absolutely believe that these new proposals are the future."

Meanwhile, the airline is upping its prices by increasing the price of check-in luggage from today for the next two months, from £15 to £20. It also announced earlier this week that it will cut the number of winter flights from the UK by 16% from November, reducing the number of passengers it carries from UK airports by 2 million. It blamed a rise in air passenger duty, which is due to rise in November from £22 to £24 for short-haul flights and £50 to £75 on long-haul returns.