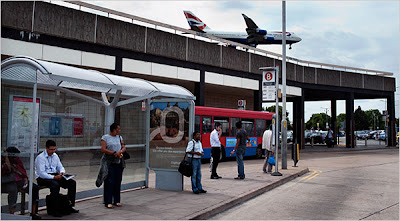 In a bold if lonely environmental stand, Britain’s coalition government has set out to curb the growth of what has been called “binge flying” by refusing to build new runways around London to accommodate more planes.

Citing the high levels of greenhouse gas emissions from aviation, Prime Minister David Cameron, a Conservative, abruptly canceled longstanding plans to build a third runway at Heathrow Airport in May, just days after his election; he said he would also refuse to approve new runways at Gatwick and Stansted, London’s second-string airports.

The government decided that enabling more flying was simply incompatible with Britain’s oft-stated goal of curbing emissions. Britons have become accustomed to easy, frequent flying — jetting off to weekend homes in Spain and bachelor parties in Prague — as England has become a hub for low-cost airlines. The country’s 2008 Climate Change Act requires it to reduce emissions by at least 34 percent by 2020 from levels reached in 1990.

“The emissions were a significant factor” in the decision to cancel the runway-building plans, Teresa Villiers, Britain’s minister of state for transport, said in an interview. “The 220,000 or so flights that might well come with a third runway would make it difficult to meet the targets we’d set for ourselves.” She said that local environmental concerns like noise and pollution around Heathrow also weighed into the decision.

Britain is bucking a global trend. Across North America, Asia and Europe, cities are building new runways or expanding terminals to handle projected growth in air travel and air freight in the hope of remaining competitive. That growth in traffic has been damped but not halted by hard economic times, and in the current global recession, business concerns have generally prevailed over worries about climate change. In the United States, Chicago-O’Hare, Seattle-Tacoma and Washington-Dulles all opened new runways in 2008.

On Tuesday, John F. Kennedy International Airport in New York reopened its Bay Runway — one of four, and the airport’s longest — after a four-month, $376 million renovation that included the creation of two new taxiways to speed plane movements between runways and terminals.

Airport expansion plans have sometimes been modified or canceled because of concerns about noise or ground-level pollution. But Peder Jensen, a transportation specialist at the European Environment Agency in Copenhagen, said that as far as he knew, Britain “is the only country that had made a conscious decision based on climate considerations.”

Heathrow, one of the world’s busiest airports and a major connection point for destinations in Europe, South Asia, and the Middle East, is already notorious for its flight delays and endless queues. It is the only airport of its size with just two runways; Paris-Charles DeGaulle has four and O’Hare has seven.

So even though the Conservative Party had been expressing growing reservations about the planned expansion since 2008, many businessman were shocked when Mr. Cameron canceled the plan after coming to power in a coalition with Liberal Democrats.

“This is a new government that claimed to be business friendly, but their first move was to eliminate one of the best growth opportunities for London and the U.K. and British companies,” said Steve Lott, a spokesman for the International Air Transport Association. “We’ve run into a short-sighted political decision that will have terrible economic consequences.”

The British government counters that the economic effects of scrapping the third runway are “unclear” while the environmental costs of adding one are unacceptably high. Ms. Villiers said that a high-speed rail network intended to replace short-haul flights would be a better way to address the airport’s congestion than adding a runway.

“We recognized that just putting more flights and more passengers into the skies over southeast England wasn’t worth the environmental costs we’re paying,” she said. “We decided to make Heathrow better rather than bigger.”

Although it is often said that emissions from air travel account for 2 to 3 per cent of global emissions, the proportion is higher in many developed countries: emissions from aviation are growing faster there than those from nearly any other sector.

The British government has calculated that aviation emissions accounted for just 6 percent of the country’s carbon dioxide emissions in 2006. But it concluded in a report that aviation could contribute up to a quarter of those emissions by 2030.

In the United States, the number of general aviation hours is forecast to grow an average of 1.8 percent a year, and to be 60 percent greater by 2025 than they are now, according to the Federal Aviation Administration. While airlines have worked hard to improve airplane efficiency, those efforts are dwarfed by the upward trend in flying.

Citizens’ groups in communities near Heathrow fought hard for nearly a decade against the airport’s runway expansion, complaining about noise and nitrous oxide pollution. As climate change became a more potent political issue in Britain several years ago, environmental groups with broader concerns jumped into the fray, staging camp-outs at Heathrow and occupying runways at smaller airports, shutting them down for hours.

“If you were a politician, how you felt about the Third Runway became a test of your commitment to dealing with climate change,” said Ben Stewart, communications director for Greenpeace U.K.

The temptation to expand airports is great for cities in search of new business and tourism. And airports in Europe are now mostly run by private companies, and for them, the more traffic, the more profit.

Some critics say that the British government’s principled stand is pointless because airlines and travelers will respond not by forgoing air travel but by flying through a different airport. Instead of emissions being reduced, the critics say, they will simply be transferred to places like Barajas Airport in Madrid or Frankfurt International Airport, both of which recently expanded.

“My personal opinion is that the decision concerning Heathrow’s third runway was highly politicized and outpaced the science of what that runway might or might not do in terms of emissions,” said Christopher Oswald, a vice president of Airports Council International, an industry group. He suggested that a third runway might actually reduce emissions above Heathrow, because with less congestion, planes would spend less time idling on runways or circling in holding patterns.

But Dr. Jensen said that building roads or runways generates more traffic in the long term because greater convenience draws people to a route.

Leo Murray, a spokesman for Plane Stupid, an environmental group that has fought new runways, called the British government’s decision “a turning point for aviation” although he added, “It is uncomfortable to have the coup de grace delivered by the Conservative government.”