Showing posts from July, 2014
Show all

Why was MH17, a civilian airliner, flying over a war zone? 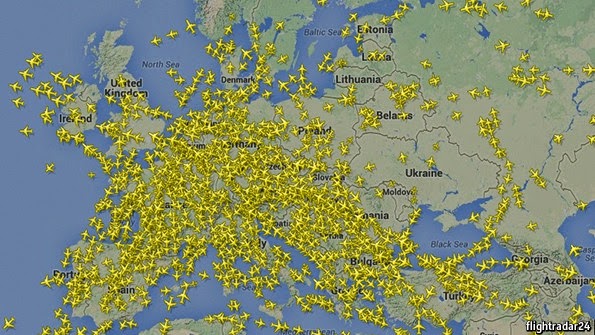 THE news that a passenger jet had been shot down on July 17th, apparently following the bungled targeting of a surface-to-air missile, was met with horror. Along with many other questions about the tragedy, some have wondered what Malaysia Airlines flight MH17 was doing flying over eastern Ukraine, which has been the setting of a low-intensity war for several months. Since the downing of MH17, commercial jets have steered clear of Ukraine (as can be seen on flight-tracking websites such as flightradar24, pictured). But how often do passenger planes normally fly over war zones? And how risky is it? Taking a detour to avoid an area of conflict means spending more time in the air, burning more fuel. So airlines go direct if they consider it safe. Malaysia Airlines was not the only operator crossing eastern Ukraine at the time of the tragedy. L980, the route in question, was the flight path chosen by many passenger jets travelling between the big cities of Europe and South Asia. In fa
1 comment
Read more
More posts