Showing posts from April, 2013
Show all

The biggest markets for low-cost airlines 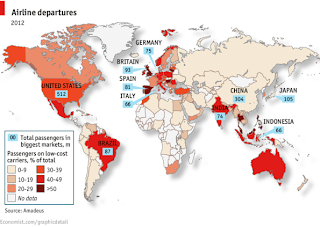 LOW-COST airlines like Ryanair and Southwest Airlines have swollen to formidable size in recent years by offering a very different approach to that of more traditional full-service airlines. With their single-class seating, range of ancillary charges and pared-down approach to all things aviation-related, these budget carriers have become a familiar, often bemoaned, feature of holidays and business trips around the globe. In British airports, for example, more than 50% of all passengers last year squeezed into seats on low-cost carriers. But Britain only comes seventh on a list ranking countries on that criterion. Figures released by Amadeus, a global travel distribution system, show that the Philippine aviation market has the greatest proportion of low-cost flyers. In that country of over 7,000 islands, 65% of all passengers used budget carriers last year. Cebu Pacific, the nation’s biggest low-cost operator, boasted over 46% of the domestic market. Among the smallest low-cost mark
1 comment
Read more

The best airport on the planet 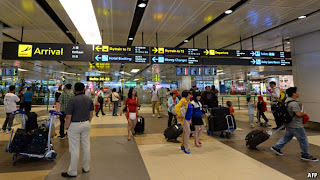 NOT ONE American airport cracked the top ten in a ranking of the planet's best airports, released last week by Skytrax, a company specialising in airline and airport research. In fact American airports didn't even feature in the top 25—Cincinnati-Northern Kentucky International was the first to appear, squeaking in at number 30. Denver and San Francisco came 36th and 40th, and at number 48, Atlanta's Hartsfield-Jackson, of which Gulliver is not particularly fond, was the only other American operation in the survey's top 50. Skytrax's rankings, which are in their 14th year, are based on a survey that asks airline passengers to rank airports across 39 different categories, from shopping to security. Over 12m passengers filled out the survey this year, according to the company. And despite Skytrax's website's suffering from a bad case of Seemingly Random Capitalisations, the awards are worth taking seriously. Some travellers might find the tenth place of
Post a Comment
Read more

Google’s own $82 million airport may soon be a reality 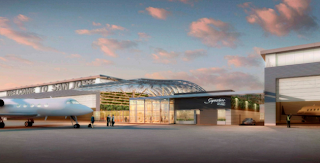 In a move that benefits Google executives and other corporate high-flyers, the City Council on Tuesday night approved an elite corporate jet center at San Jose’s airport, without adding an extra curfew provision that had been omitted in the bidding process. In a 10-1 vote, the council approved a 50-year lease agreement with Signature Flight Services to build an $82 million facility on the west side of Mineta San Jose International Airport. Only San Jose City Councilman Pierluigi Oliverio was opposed, saying there were other ways the city could help the cash-strapped airport repay its exhorbitant debt without disturbing citizens with more flights. About two dozen residents who live near the airport’s flight path urged the council to reconsider the project by adding back the extra curfew provision, increasing the curfew violation fines, or reducing the length of the lease. “If the city approves the Signature aircraft lease, it will accomplish one good thing and two bad things,”
Post a Comment
Read more

How can television signals be used to track aircraft? 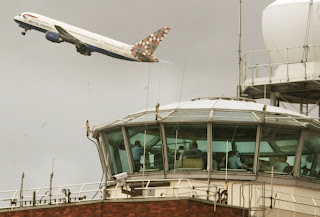 An experimental radar system, due to be switched on in June 2013, will use ordinary television signals to track aircraft flying over London. How will it work? Radar, which is an abbreviation of “radio detection and ranging”, detects distant objects by bouncing radio waves off them. In a conventional radar system, these radio waves are emitted by a rotating antenna that sends out radio pulses and listens out for reflected signals that have bounced off aircraft. The time delay between emitting the pulse and detecting its reflection allows the aircraft’s distance to be determined. Its speed and direction can also be calculated, because the aircraft’s motion causes a slight shift in the frequency of the reflected signal due to the Doppler effect (the phenomenon that also causes a passing ambulance’s siren to change pitch). But this is not the only way to build a radar. Another approach, called “passive radar”, relies on existing signals, such as television and radio broadcasts, to
Post a Comment
Read more
More posts