Showing posts from July, 2011
Show all

Ancillary advice: Know your strategy, and find inspiration outside the industry 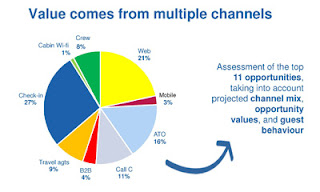 Among all the marketing concepts that have arisen in the airline industry, perhaps none has created more buzz than ancillary revenues. But for all the attention it has received, some airlines still do not have a clear strategy, according to David Stoyle of Amadeus Airline Consulting. In a presentation to delegates to the recent Amadeus Airline eCommerce Conference in Cannes, France, Stoyle quoted Sun Tzu, author of the ancient "Art of War": "Tactics without strategy is the noise before defeat." "High-value airlines are making a lot of money with ancillary revenues," Stoyle said. The $20 billion worldwide that airlines took in last year in ancillary revenues has taken pressure off base fares and in many cases is subject to lower taxes or no taxes.  But ancillary revenue projects can fail if an airline lacks clear overall objectives and priorities or if their "bundling" and "a la carte" efforts are going in two different directions, h
1 comment
Read more
More posts