Showing posts from September, 2010
Show all

By Thibaut - September 24, 2010
Air France and KLM Royal Dutch Airlines, one of the world’s largest airline groups flying more than 71 million passengers annually, and Amadeus announce the group’s successful migration to Amadeus’ Altea Inventory solution. The migration sees the replacement of the two legacy systems that have served each airline for the last forty years and marks a major step in the group’s initiative to modernise and consolidate its Passenger Service System. Fully integrated with Altea Reservation, the common airline group’s reservation system, Altea Inventory allows Air France-KLM to benefit from unique capabilities such as real-time seat availability across all direct and indirect channels including online distributors, and to take advantage of the most advanced revenue management techniques. “This successful migration is a strategic step towards the transformation of our IT systems and the achievement of Air France-KLM synergies.” said Bruno Matheu, Air France-KLM eVP Marketing, Revenue-Mana
Post a Comment
Read more 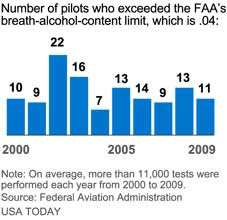 An airline pilot caught this week in Amsterdam for being over the legal alcohol limit just before takeoff highlights an issue among U.S. pilots that occurs once a month on average, government data show. The case of the unidentified Delta Air Lines captain renews a long-standing debate about whether the federal blood-alcohol limit for pilots — .04% — is adequate to protect safety. In most states, the legal limit for driving is .08%. About 12 commercial pilots are found to violate the FAA standard each year, according to agency data. That's a small fraction of the more than 11,000 who are tested yearly. The pilot in Amsterdam had a blood-alcohol content of .023% when he was measured in the middle of the day, according to Dutch authorities. That means the case would not be considered a violation under U.S. law, although he would have been prohibited from flying until tests showed he was below .02%, according to the Federal Aviation Administration (FAA). Elaine Weinstein, former h
Post a Comment
Read more

By Thibaut - September 16, 2010
New rules to counter concerns about pilot fatigue will be considered by the House Aviation Subcommittee Thursday. Backer of the Pilot Flight and Duty Time Rule say commercial pilots would benefit from streamlined rules on flight time, duty and rest requirements. Over the past 15 years, fatigue has been linked to more than 250 fatalities in air carrier accidents, according to the National Transportation Safety Board. Transportation Secretary Ray LaHood, in a statement last week, said, "This proposal is a significant enhancement for aviation safety." He told reporters the proposal would, for the first time, "give pilots the rights to decline an assignment if they are fatigued, without a penalty." Pilot fatigue was cited as a chief contributor to the February 2009 crash of Colgan Air flight 3407. Fatigue was linked to questions about the crew's ability to recognize the plane was in trouble and how to correctly respond. The commuter plane nosedived into a hous
Post a Comment
Read more

By Thibaut - September 15, 2010
Delta Air Lines Inc. said it canceled a flight from Amsterdam to Newark, New Jersey, because of concern that a crew member was “unfit for duty.” Flight 35 was scrubbed, the crew member was suspended and passengers will be rebooked on an extra plane tomorrow, Anthony Black, a Delta spokesman, said today in an e-mail. Dutch police said a 52-year-old airline captain from New Jersey was arrested on an alcohol charge, without identifying his employer. Authorities pulled the pilot off his plane after receiving an anonymous tip that he was drunk, said Jos Klaren, a spokesman for the police. A breath test showed the pilot’s blood-alcohol level exceeded the legal limit, Klaren said. “Delta’s policy is that pilots shall not report for duty with the presence of any alcohol in their system,” Black said. The arrest was at least the third involving a U.S. pilot and alcohol in 16 months. In November, a United Airlines pilot was charged with operating an aircraft under the influence after fail
Post a Comment
Read more

Don't let Ryanair see these: Seat with 23 inches of legroom unveiled to increase number of passengers in 'saddle class' 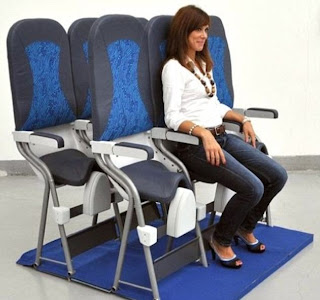 It brings a whole new meaning to the term cattle class, a plane seat that is shaped like a saddle and could allow airlines to squeeze in even more passengers. Named the 'Skyrider', the new seat design is set to be unveiled in America this week and promises to attract plenty of attention from airlines looking to increase the number of seats in the economy class sections of planes, apparently without compromising on comfort. Passengers sit at an angle with just 23 inches of legroom between them and the seat in front - a whopping seven inches less than the current average seat pitch of around 30 inches. A yee-ha moment? Airlines could be attracted to the Skyrider saddle seat because it would enable them to squeeze more passengers into a cabin without compromising strict safety rules dictated by European aviation authorities The concept, designed by Italian aircraft seat design company Aviointeriors, could especially appeal to no-frills carriers who are keen to make flights m
Post a Comment
Read more 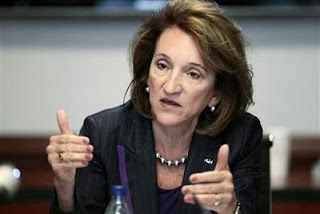 Aerospace Industries Association President and CEO Marion Blakey gestures as she speaks during the 2010 Reuters Aerospace and Defense Summit 2010 in Washington, September 8, 2010. The U.S. aviation and aerospace industries are considering asking Congress for a slice of the $50 billion in infrastructure assistance proposed by President Barack Obama, a top trade group official said on Wednesday. Marion Blakey, president of the Aerospace Industries Association, told the Reuters Aerospace and Defense Summit that her organization has had discussions with other industry groups about the prospect of financing for new cockpit navigation equipment required for air traffic modernization. "The president has opened the door," Blakey said, adding that it was up to airlines and other industry interests to work with Congress to see what amount of money would be viable. Obama is proposing the infrastructure financing as part of an election year plan to jump-start the U.S. economy a
Post a Comment
Read more

By Thibaut - September 10, 2010
Commercial passenger aircraft are set to break a 2008 record for worldwide flight-hours this year, partly because of international travel, a Honeywell International Inc. executive said. “We are very much in the recovery of the commercial cycle,” John Bolton, head of the company’s commercial airlines unit, said in an interview yesterday. Honeywell, a maker of aviation instruments including so- called black-box recorders, based the projection on information from industry data provider OAG. Honeywell declined to give the flight-hour tally. OAG confirmed flight hours are set to reach a record, and Diana Cronan, a spokeswoman, said totals weren’t immediately available. Passenger traffic at airports around the world rose 6.9 percent in July, for a year-to-date increase of 5.9 percent, according to a report last week from Airports Council International. Boeing Co., the world’s second-largest maker of commercial aircraft, said yesterday that passenger traffic so far is “very close or ov
Post a Comment
Read more 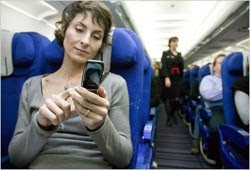 Brits don't want in-flight calling. Er, too late, probably. Sorry. A new survey reveals that the majority of Brits don't want regulations on in-flight calling relaxed... a shame since those regulations were relaxed more than two years ago. Online store Mobile Phone Expert asked more than 1500 people if they "welcomed the change in legislation that allows passengers to use their mobile phones". Almost half reckoned that in-flight calling would disturb their journey, though 34 per cent agreed that "it was about time regulation was relaxed". A strange sentiment when the regulations on in-flight calling were published by Ofcom in March 2008, with the service being demonstrated by Air France a month later. The inability to make calls while in the air is now a commercial issue, not a regulatory one. To get a mobile working the aircraft must be fitted with a femtocell (a tiny base station), and a satellite uplink to carry the calls. The femtocell also has
Post a Comment
Read more

By Thibaut - September 03, 2010
American officers are taking up posts at Paris' Charles de Gaulle Airport to help identify potential terrorists or other high-risk passengers heading to the United States. Officers from the U.S. Customs and Border Protection's Immigration Advisory Program joined French airport personnel Thursday. U.S. officers are working at airports in seven other countries under the program. The U.S. Department of Homeland Security expanded the program after an attempted terrorist attack by a passenger on an Amsterdam-Detroit flight last Christmas Day. The Americans can recommend that airlines and governments block a passenger from boarding, but can't make arrests. Aside from identifying terrorists, the program aims to prevent human smuggling and passport fraud. Source :  http://www.khon2.com/news/world/story/U-S-officers-take-up-posts-at-Paris-airport/xi1lIwJFqEKB16OBAarKjg.cspx
Post a Comment
Read more

Airbus to start 'green flight' trials with A380

Airbus, in partnership with Air France and air navigation service providers from UK, Canada and the USA, is about to commence ‘Transatlantic Green Flight’ (TGF) trials with an Air France A380 on commercial flights from New York to Paris. The A380 TGF trials are part of the second phase of the Atlantic Interoperability Initiative to reduce Emissions – AIRE2. The first phase, AIRE, was launched by the European Commission and the Federal Aviation Administration (FAA) in June 2007. The TGF flights are scheduled to take place over 6-8 weeks, starting in the fourth quarter of 2010. They will cover the optimisation of the taxi-out procedure at John F. Kennedy (JFK) airport in New York, as well as the en-route leg over the Atlantic. Overall it is estimated that each A380 flight can reduce CO2 emissions by around 3 tonnes, compared with existing procedures. “These transatlantic flight trials will help to move the industry towards more efficient operational concepts and sustainable growt
Post a Comment
Read more

France arrests man for trying to dazzle pilots with laser

By Thibaut - September 01, 2010
A man appeared in court Tuesday accused of trying to dazzle pilots with a laser beam as they were landing at France's second-busiest airport Paris Orly, aviation authorities said. "Several pilots complained and the man was arrested near the runway," a spokesman for the civil aviation authority said. Airport security officials said three pilots, including crew of Air France and EasyJet flights, warned the control tower on Sunday, which alerted the police and the man was caught in the act. A spokeswoman for Air France said its pilot was never in any difficulty but there had been a growing number of such incidents. Source :  http://af.reuters.com/article/oddlyEnoughNews/idAFTRE67U3YE20100831
Post a Comment
Read more
More posts