By Thibaut - July 25, 2010
For the long-suffering commercial aviation industry, signs of recovery are busting out all over.

Aerospace manufacturers came away from the bi-annual Farnborough International Airshow this past week with more than $30-billion (U.S.) on their order books, not a record by any means but a far cry from the meager $7-billion in orders last year at Farnborough’s sister show, Le Bourget, near Paris.

Airlines – including Air Canada – that not so long ago had been bleeding red ink are reporting stronger quarterly results and presenting upbeat forecasts as passengers take to the skies once again.

A cyclical business notorious for its brutal downturns, the aviation sector is beginning to shake off the effects of a recession that left it struggling with its worst crisis in decades.

After posting losses of $9.4-billion (U.S.) in 2009, the global airline industry will bounce back this year and make $2.5-billion in profits, according to the International Air Transport Association.

Asian, South American and Middle Eastern markets will continue to post strong growth, according to the IATA. But profits in Europe will be darkened this year by the airspace closings that resulted from the explosion of an Icelandic volcano in April.

North American earnings are also likely to remain sluggish because of the weak U.S. economy, according to IATA.

Middle Eastern airlines are attempting to carve out a much bigger role for themselves and that was reflected at Farnborough, where the Dubai-based carrier Emirates ordered 12 new Boeing 777-300ER long-range planes, valued at $3.25-billion.

Aerospace manufacturers are finally getting some relief after struggling with a steep decline in aircraft orders over the past few years, but big airlines remain cautious customers.

While the credit crunch has eased, many carriers are still shying away from committing to major purchases. Some of the major buyers of new planes in this recovery have been aircraft-leasing companies that get discounts for buying in bulk and then lease the planes to carriers.

Montreal-based Bombardier Inc. did not come away from Farnborough with new orders for its new long-range C Series jet. But it could benefit from a sharp rise in demand for small and mid-sized planes by carriers in emerging markets.

Bombardier, as well as its Brazilian rival Embraer SA and new entrants from China, Russia and Japan, are well-positioned to cater to that demand.

Many of the fastest-growing areas for passenger traffic are emerging markets, ranging from Latin America to Asia. Airports in those regions are moving up the lists of the world’s busiest air traffic centres.

Beijing is now the world’s second-ranked airport for total passenger traffic, and dozens of smaller airports in China are being built or expanded to handle the surge in domestic air travel that is expected over the next decade.

In the Middle East, Dubai Airport is fast becoming a major international hub.

It is in a geographical sweet spot between East and West and is trying to market itself as a convenient transit point between any two big cities on earth thanks to long-range airliners. 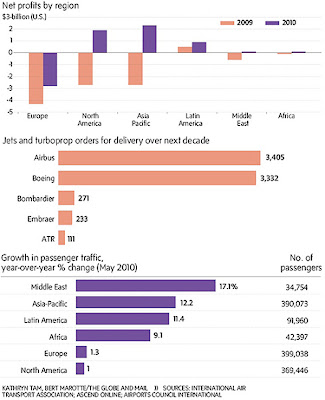