British Airways, Iberia and American Airlines get US anti-trust immunity for transatlantic business 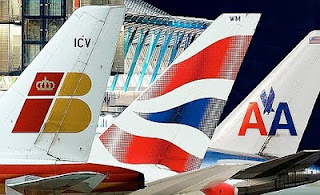 British Airways (LON:BAY) and its partners Iberia (MCE:IBLA) and American Airlines - a member of the AMR Group (NYSE:AMR) - have received the final regulatory approval required to operate its transatlantic joint venture.

“By working together, the airlines will expand customer choice by supporting routes that would not be economically viable for a single airline”, British Airways stated.

The airlines have now been granted anti-trust immunity from the US Department of Transportation. "This final approval is fantastic news for all three airlines and the oneworld alliance. We've waited 14 years to bring the benefits of the transatlantic joint business to our customers and level the playing field with the other two global alliances”, British Airways Chief Executive Willie Walsh commented.

“We look forward to delivering enhanced competition for customers on transatlantic flights. By working collaboratively, we will enhance our product offerings, strengthen our route networks and better position our airlines to compete in an ever-changing global aviation marketplace," American Airlines chief executive Gerard Arpey said.

The transatlantic partnership received EU regulatory approval last week. Similarly the proposed merger between British Airways and Iberia was also rubber-stamped by the EU commission, and the deal is expected to complete before the end of 2010.

In today’s statement, Iberia executive chairman Antonio Vazquez emphasised the increasing focus on consolidation in the industry. “I am convinced that consolidation is the best and only way to succeed in the airline industry, and the approval we have received today to create a joint business is a very important step towards this consolidation process", Vazquez commented.

Two other oneworld members, Finnair and Royal Jordanian, also received antitrust immunity from the US Department of Transportation.