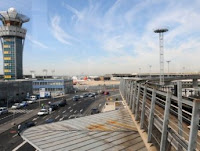 An air traffic control strike disrupted journeys from airports across France on Wednesday with one in five flights cancelled from Paris's main international airport Charles de Gaulle.
Queues formed as half of all flights were also cancelled from Paris's second biggest airport, Orly, which serves domestic and some international destinations, the civil aviation authority DGAC said.
Cancellations began on Tuesday evening at Orly, where Simone Battaglia, 30, was stranded overnight after his Easyjet flight home to Naples was scrapped.
"The company is just offering us a flight for Milan tomorrow," he told AFP. "But Milan is hundreds of kilometres from Naples. That means we'll have to take the train. It's a waste of time and money."
DGAC said disruption was expected at most French airports due to the strike, which comes as many people are leaving for their summer holidays.
Storms forecast later in the day were likely to add to the disruption.
Unions representing air traffic controllers called the strike to protest against plans to merge France's 4,000 controllers and 8,000 other DGAC personnel into a European-wide system.
Air France said 80 percent of its short- and medium-haul flights and all its long-haul ones from Charles de Gaulle would run as normal, and half its short- and medium-haul flights from Orly.
Its long-haul flights were not affected.
Budget airline easyJet cancelled about a third of its departures overall from Charles de Gaulle and Orly to destinations across Europe, according to its website.
At Nice airport, the biggest hub for the holiday hotspots of southern France, nine percent of flights were cancelled on Wednesday, authorities said.
The action was scheduled to run until Thursday morning. It was the third major airport strike in France this year, after similar actions in January and February.
Currently the European Union's air space is a patchwork of 27 air traffic control systems, subdivided into 250 sectors.
As a pilot enters a new sector he must change radio wave frequency and contact the next air traffic control team.
The European Union's 2009 single sky legislation calls for "Functional Airspace Blocks" to be in place by 2012, creating boundary-free airspace to improve efficiency and safety.
France would become part of the Central Europe block, along with Belgium, Germany, Luxembourg, the Netherlands and Switzerland.
In Spain, two-thirds of air traffic controllers in Barcelona called in sick on Tuesday in what was interpreted as an undercover strike. Spanish Transport Minister Jose Blanco said military personnel would cover for them.