From Nothing to a Global Hub for Aviation 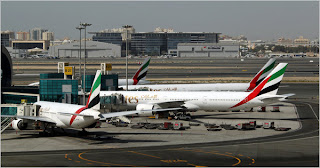 Attention airline passengers: While some of you were fuming right along with the Eyjafjallajokull volcano in Iceland this past spring, others were finding a new route to international destinations that avoided the ashy Atlantic skies entirely. So, while many regions of the world took a hit in April and May, Middle Eastern carriers carried on, showing a 19 percent increase in passenger volume over last year.

Al Maktoum International Airport in Dubai was designed to handle 120 million passengers a year.
On top of that, the number of their passengers choosing to fly premium class went up 25 percent — “a race to the top,” according to the International Air Transport Association, the lobbying organization and trade group based in Montreal and Geneva.

Global shifts in economic circumstances have created new opportunities, and aviation industry insiders say many of these, both short- and long-term, promise to be in the Middle East.

“The Middle East had the luxury of starting from a blank piece of paper,” said Steven Lott, communications director for IATA in North America. “They were able to design the airline model and the infrastructure models. They opened the biggest airport in the world,” he said, referring to the newly opened Al Maktoum International Airport in Dubai, designed to handle 120 million passengers a year. “Less than 30 years ago they were able to start with a blank piece of paper and move ahead.”

Since the days of pearl diving in the Gulf, the United Arab Emirates have been a crossroads for trade. The airlines, however, Emirates of Dubai, Etihad of Abu Dhabi and the discount airline Air Arabia of Sharjah, are relatively new arrivals on the scene. As economic growth makes air travel more accessible in India, China and other parts of the Asia-Pacific region, the emirates have become a tourist and business center as well as a transit hub.

“The potential is unbelievable,” said Nawal Taneja, the chairman of the aviation department at Ohio State University.

“India, has 1.2 billion people,” Professor Taneja said. “Say that on average only 20 percent have the ability to buy a cheap ticket, that’s 240 million people.”

“Where is the market potential 10 years from now? It is in China. It is in India. The U.A.E. airlines are setting up their expansion growth there.”

The birth of new airlines, like Bahrain Air and Jazeera Airways of Kuwait, bears witness to that policy, as does the building of new airports in Dubai and Doha, Qatar, and an enormous expansion of Abu Dhabi International.

Abu Dhabi’s leaders have decided to update their oil-fueled economy by turning their emirate, with its population of 1.5 million, into a global center for aviation by 2030. Mubadala Development, created by the government, has been buying into or connecting with aerospace companies like Rolls Royce, Sikorsky and Finmeccanica, to start local manufacturing and repair facilities.

“Our growth projections tell us that there is an enormous market potential” Homaid Al Shemmari, the executive director of Mubadala Aerospace, wrote in an e-mail message.

Emerging markets like the Middle East are changing the aviation market, said Randy Tinseth, Boeing’s vice president of marketing. “We’ve seen very dramatic growth in the last decade,” he sad. “They are leveraging their geographic position in the world. They’re leveraging the newest technologies.”

They are also leveraging their clout. With airlines in the United Arab Emirates spending billions on planes, Airbus and Boeing have agreed to assist with Mubadala’s maintenance and repair stations and to help develop Strata, a manufacturing plant in Al Ain, 145 kilometers, or about 90 miles, from Abu Dhabi.

“The Middle East already has the world’s largest fleet of wide-body aircraft, with many more orders in place for newer platforms such as the Boeing 787 and Airbus A350,” Mr. Shemmari said. “This investment was made in anticipation that Strata will be used to produce sections of aircraft for the A330, 340 and 380.”

The recently opened Strata factory is expected to employ 500 people and build products for Airbus by 2014, according to a company brochure.

Mubadala said 10,000 people would be needed to work in Abu Dhabi’s new aviation and aerospace plants and the goal was to fill those jobs with local citizens. This may be challenging.

The aim of progressing from a lucrative, low-employment oil economy into more labor-intensive activities is not just to make money but also to spread the social benefits, creating job opportunities that will enable people to participate in the economic growth of their country.

“Although Abu Dhabi is fortunate to have both the capital and energy needed to sustain the requirements of the aerospace industry, there will be a heavy focus placed on developing the highly skilled workforce that is needed,” Mr. Shemmari said.

The first test will come at the Strata plant. Airbus and Boeing are already on site, and aviation job boards are heavy with Middle Eastern help-wanted advertisements.

“These people are swimming in wealth but they have to be willing to be taught how to repair an engine or repair an aircraft or even sit in an office for eight hours and diligently get paperwork done,” said a contractor who has worked in the region but did not want to be identified. “They do need education. They need people to get technical degrees. They need to have people actually willing to do the work.”