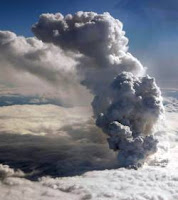 An ash cloud from Iceland's Eyjafjallajokull volcano caused further disruption to airline operations in Europe, mainly affecting flights to and from Italy, Spain, France, Portugal, Austria, Scotland and Ireland over the weekend.
Transatlantic flights were subject to "significant rerouting" that resulted in delays, Eurocontrol said. There were 22,424 flights within the parameters of Eurocontrol's Central Flow Management Unit on Saturday, about 200 below normal traffic levels, and on Sunday there were 23,491 flights, about 1,500 below normal traffic levels.
By yesterday morning the areas of high ash concentration had dispersed and no airports were closed in Europe. But forecasts warned of the possibility of areas of higher ash concentration moving into the Iberian Peninsula by late yesterday. An area of ash cloud in the middle of the North Atlantic continued to impact transatlantic flights Monday, leading to major reroutings. Eurocontrol expected approximately 28,500 flights yesterday, 500 below average.
Eurocontrol is sending "Air Ash Concentration Charts" describing proposed no-fly and caution zones to its EU member states in line with agreements reached last week by the EU Transport Council and Eurocontrol member states plus Estonia and Iceland (ATWOnline, May 5). Airlines operating aircraft in airspace with low levels of contamination from volcanic ash are requested to do pre- and post-flight inspections to detect any erosion, accumulation of ash or aircraft/engine damage or system degradation.
Ryanair confirmed Sunday that two of its 737-800s at Belfast City showed "small" traces of ash in their engines. Air France said that a pilot reported "an odor" during a flight from Perpignan to Paris Orly but a "thorough" maintenance check on the A319 showed that "neither the outside of the aircraft nor the engines showed technical abnormality nor was there any evidence that the aircraft had encountered volcanic ash."
Source : http://atwonline.com/operations-maintenance/news/volcanic-ash-disrupts-air-traffic-europe-again-0510