Bombardier
The Canadian aircraft maker has gone challenging the current duopole of Airbus and Boeing with its CS300.

Embraer
The Brazilian aircraft maker has imposed itself as a world leader in smaller airliners with its E-Jet series. It was jesting with Bombardier in a duopole for some time until the Canadian company decided to enter another field. 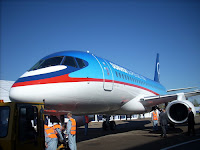 Sukhoi
The Russian company renown for its military aircraft has launched a development program for a commercial airliner, the Superjet-100, with Putin's blessing as the Russian market is up for grabs. The older, prouder soviet era companies (Tupolev, Antonov, Yakolev) have been plagued by failures.

Mitsubishi
The announcement by a Japanese manufacturer was surprising. The MRJ (Mitsubishi Regional Jet) has nevertheless the chance of taking a share of the market, with Boeing backing it.

COMAC
China will take the time it needs. It can send man into space. It can build its own airplane, the C919, with the know how that has been poured into the country by western company.

Conclusion
Everyone is building aircrafts that all look the same. What we need right now is enough imagination to get to the next stage of air travel. We need a breakthrough before oil runs out.