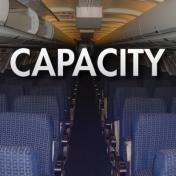 A report "Capacity and Frequency Analysis for Intra-European Operations" by UK-based RDC Aviation makes some interesting points about capacity distribution in Europe. The top ten airlines in terms of seat capacity in Apr-2010 were headed by Ryanair with 7.3 million, a 13.3% increase, followed by Lufthansa (5.7 million +2.8%) and Air France (3.8 million -8.4%).

Immediately after these two legacy giants came the other two largest European LCCs, easyJet and Air Berlin, the former with 4.4 million seats (+10.1%) and the latter with 3.0 million (+22%), having streamlined its fleet in 2009 and having moved back into an operating profit during the year.

Those airlines continuing to languish in the month (the data not being affected by the volcanic ash cloud or industrial action though it may have been skewed by the Easter period falling in April this year) included BA (2.4 million -2.0%) and its putative partner Iberia (2.3 million -13.8%), which is still suffering from the reduction in leisure traffic to Spain. Alitalia (2.1 million +15.5%) continues to recover its position in the Italian - European air markets.

No time Toulouse
RDC Aviation also provides data on the top intra-European city pairs. Despite the growing influence of the AVE high-speed train in Spain, and its presence on the Madrid-Barcelona route (via Zaragoza), that air route continues to have the most capacity of any European route and actually grew in Apr-2010 to 434,778 seats (+1.6%). Neither have the TGV high-speed trains in France unduly affected the routes Paris Orly to Toulouse (242,872 -2.6%) and Paris Orly – Nice (221,127 +3.4%). Traffic on two Italian routes were well down – Rome to Milan and Rome to Catania (Sicily) and slightly down on Rome – Palermo (also Sicily).

Alitalia has reduced its presence in Milan then some of the slack was taken up by Lufthansa Italia but it, too, decided to suspend Milan-Rome services. Again, there is a high speed rail service between Rome and Milan, since Dec-2008, which reduced travel time to around 3.5 hours for the 480 km route and which is reputed to be cheaper overall than the air fare (which is not always the case in Europe, especially in the UK).

Also figuring in the table are air routes connecting the second and third largest German cities, Hamburg and Munich, (which are at opposite ends of the country and right on the cusp of operating efficiency for the ICE rail trains over air travel at just over 600 km apart), and those connecting the chief commercial city, Frankfurt, with the capital, Berlin. The capacity here was stable in Apr-2010.

The route Istanbul (Ataturk) – Izmir also makes the top ten - though down by 7.5% - again indicating the popularity of Turkey as a vacation destination momentarily and making up the numbers is Oslo – Bergen in Norway (+34.8%), a difficult cross country surface journey between the capital and the chief oil industry city on the North Sea coast.