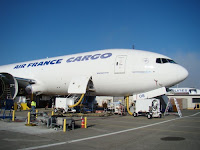 Paris - In light of massive financial losses from its freight division, Air France is expected to give up its freight division, French daily Figaro reported Saturday.
The company is expected to tell its employees on Monday about the division's closure, reported the paper. That would mean freight would only be shipped in available space on passenger planes.
Air France has lost 660 million euros (809.9 million dollars) on its freight division in the last two years. The division has also shrunk from 47 per cent to 26 per cent of goods transported by the company, with the freighter fleet declining from 11 to five planes.