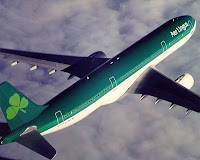 Aer Lingus says the group's financial performance for the next three months will be 'significantly impacted' by recent airspace disruption caused by the volcanic eruption in Iceland, but the company is still upbeat in its outlook for the rest of 2010.

In its interim management statement released today, which deals with Aer Lingus' performance for the first three months of 2010, it said its initial estimate of the cost of the airspace disruption will approximately €20m.

Aer Lingus said that total revenues for the first three months of 2010 were down 1.8% to €230m from €234m. The airline said it made an operating loss of €37.8m for the three month period, an improvement from losses of €74.8m the same time last year.

The airline said that total operating expenses were down 13.3% due to lower staff and fuel costs as well as lower volume related costs such as airport charges. Average fare per passenger from short haul and long haul operations increased by 3% and 12.4%, respectively.

It said its cost cutting programme has resulted in savings of €2.8m so far this year mainly due to pay cuts and job cuts. However it said some of these savings have been offset by disruptions to operations due to the volcanic ash. It is also waiting for a Labour Relations Commission ruling on cabin crew rostering.

Christoph Mueller, Aer Lingus’ CEO said in the statement, “Our Q1 2010 operating result represents a significant improvement over the period in 2009. We have also achieved meaningful progress on several of the key strategic objectives set out at our Investor Day in January: We have adopted a disciplined approach to yield management, which has arrested the decline in average fare per passenger that we experienced in 2009. We enhanced our network with the launch of our extended code-share with United Airlines and the Aer Lingus Regional franchise in March.

"The Greenfield programme is now underway and staff savings with an annual value of €18m have already been achieved. While we are very encouraged by first quarter trading, it is nonetheless appropriate to remain cautious on full year 2010 performance” he concluded.
Source : http://www.businessandfinance.ie/cat_news_detail.jsp?itemID=1612