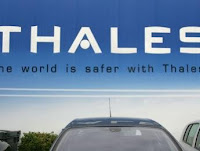 The French defence group Thales confirmed Monday that it has been court-ordered to pay damages and interest on unauthorised commissions relating to the sale of six frigates to Taiwan in 1991. The amount comes to a total of 630 million euros.

By News Wires (text)
AFP - Arbitrators ordered French defence group Thales on Monday to compensate Taiwan in a dispute over a warship sale in 1991, the company said, with reports putting the figure at hundreds of millions of dollars (euros).
"Thales has been ordered to pay damages and interest," a spokesman for the company told AFP, adding that the company would later announce the full amount of the payments ordered.
The newspaper Le Figaro reported that the amount was around a billion dollars (750 million euros).
It said the arbitrators ordered the payments to Taiwan to make up for unauthorised commissions that were paid to help Thomson-CSF, the company that later became Thales, win a deal to sell six frigates to Taiwan in 1991.
The contract governing the deal forbade such payments and stipulated that any illicit commissions would have to be repaid to Taiwan. The contract also said that any dispute would be settled by the panel of arbitrators.
The Thales company spearheaded the sale, but the main stake in the contract was held by the French state-owned shipbuilder DCN. Several sources said the French state would have to pay 70 percent of the penalty.