Weather conditions delay flights in Europe and Northeast of the USA 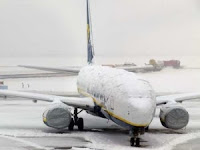 As of 5 p.m. ET. flights at many of busiest airports in the Northeast were being affected by delays, though some of the worst delays begin to subside.
The longest delays of the day were encountered by passengers at the three airports in the great New York City area.
Average delays had exceed four hours this afternoon at JFK, LaGuardia and Newark Liberty airports, according to the Federal Aviation Administration.
LaGuardia was especially hard hit, with average delays approaching 5 hours, 22 minutes around 2:3o p.m. ET today, according to the FAA.
The delay averages eased somewhat by dinnertime, however, dropping to 2 hours, 30 minutes at LaGuardia and and 3 hours, 12 minutes at Newark. As of 5 p.m. ET, average delays at JFK were just shy of 4 hours.
Boston flights were being delayed by about 65 minutes.
In Philadelphia, the FAA's website showed storm-related delays had disapated after averaging about 90 minutes earlier in the day. Earlier delays at Washington Dulles and at Washington-Baltimore had also eased since this morning, according to the FAA.
Still, travelers catching flights today across the USA were at risk of being affected by the delays, even if they were scheduled to fly in parts of the country experiencing good weather.
An afternoon flight from Phoenix to San Francisco, for example, could have become delayed or canceled if the aircraft scheduled to operate that flight got bogged down this morning in New York.
At least two airlines moved to accommodate customers affected by the poor weather.
Continental, which operates a major hub at Newark, waived change restrictions for most customers scheduled to fly to, from or through that airport today or Thursday.
Continental's waiver also covered passengers scheduled to fly through Baltimore, Boston, New York JFK, New York LaGuardia, Philadelphia, Washington National and Washington Dulles.
United, which merged with Continental this year, issued a waiver policy with the same details. One of United's largest hubs is at Washington Dulles.
With some conditions, the rule waiver allowed customers booked on tickets to fly through those airports today or Thursday to make one change without being charge the standard change-of-ticket penalty.
But the U.S. Northeast wasn't the only region experiencing weather delays today. Conditions were even worse in Europe, where an unusually winter storm was creating travel problems across large parts of the continent.
The Associated Press writes "Gatwick, London's second largest airport, and Geneva, a major hub for low-cost carrier Easyjet, were forced to shut down Wednesday as staff struggled to clear runways of snow. Edinburgh airport in Scotland, Leeds airport in northern England, and Chambery and Grenoble in southeastern France also were closed. Eurocontrol, the central air control agency, reported severe flight delays in Brussels, Frankfurt, Munich, Vienna, Prague and Paris Orly."
Problems appeared likely to continue into Thursday.
France's civil aviation authority asked airlines there to reduce Thursday's flight schedules in anticipation of heavy snow. Bloomberg News reports that "the authority has requested carriers cancel 25% of flights in and out of the Roissy Charles-de-Gaulle airport and 10% of flights at Orly airport, it said in an e-mailed statement."
One U.S. carrier -- US Airways -- said it would waive change fees for customers schedule to fly to or from the United Kingdom today through Friday.
Source : http://travel.usatoday.com/flights/post/2010/12/storm-delays-airports/133141/1