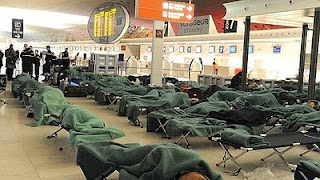 The decision was taken based on fears that the weight of snow over the roof of terminal 2E in Roissy Charles de Gaulle airport. Thousands of stranded travelers who couldn't get on their flights due to the bad weather will certainly spend Christmas Eve in the airport.

Terminal 2E had already collapsed just after its opening in 2004 under the weight of the snow. On friday 24/12/2010, 2000 people were evacuated smoothly and firefighters have started to work on removing the 60cm of snow accumulated on the roof.

This morning, 50% of every flight had been canceled and the DGAC (National Authority for civil aviation) advises airlines to cancel 35% of their flights. Of the 1,160 planned flights, 670 have already been canceled. 100,000 people have been affected by the chaos.

Apat from the cold temperatures, one of the problems is that the supply of Glycol, used as anti freeze on airplanes, is insufficiant and would only allow 200 more flights to depart. A french industry that produces Glycol is currently on strike and the chemical has to be imported from Germany and the USA.

Aéroports de Paris is giving beds 800 to allow the passengers to sleep and Air France has annouced that it "offers 3,500 hotel rooms" to accomodate its customers in need. Both companies are calling on volunteers to help with this crisis.