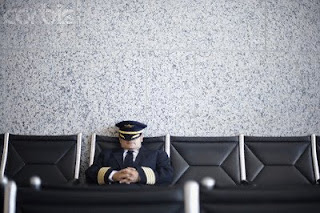 The European Union wants to limit the number of hours that pilots can work daily in order to reduce fatigue that some scientist say is a cause in a fifth of all fatal air crashes worldwide.
The European air safety agency recommended Monday that pilots not work more than 14 hours during the day or 12 hours at night, including time spent at airports while waiting to get airbound.
The proposal was immediately criticized by Europe's umbrella pilot union, which said that the agency had buckled under the pressure from the commercial airlines. The European Cockpit Association, which represents some 39,000 European pilots, wants bigger reductions.
Supporters of shorter working days have been pressing for years for tighter regulation and enforcement of working hours and rest periods, driven by worldwide concerns about exhausted pilots working taxing schedules.
They say scientific research has identified fatigue as a factor in a fifth of all fatal crashes worldwide.
The new rules would standardize working hours for pilots across the continent. In Britain, for example, pilots are not allowed to be on duty for longer than nine hours a day. Elsewhere in Europe, especially in the east, that limit is much higher.
"The (document) requires all operators to ensure that the performance of crew members will not deteriorate to the extent that flight safety is endangered because of the effects of fatigue," the European Aviation Safety Agency said in a statement.
EASA spokesman Dominique Fouda said the proposal would be submitted for comments to the airlines, pilots unions and air safety groups before a final recommendation is handed to the European Union next year. The EU is expected to approve the new regulations by April, 2012.
In the United States, the Federal Aviation Administration also has proposed new limits on the number of hours a pilots can fly in a day and the level of rest required between flights. Congress mandated the rules after a crash in 2009 near Buffalo, New York, which was attributed partly to pilot fatigue. Fifty people died.
The FAA proposal would bar pilots working more than 13 hours in a 24-hour period — a reduction of three hours from current levels. At night, the limit could be reduced to nine hours.
Source : http://www.google.com/hostednews/ap/article/ALeqM5hPjzc1xTa1KkL0q9pZm0mdCo7E6Q?docId=ffe409ef8d9c45218cb85142ccd41ef6