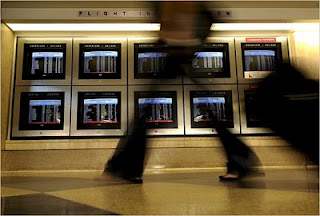 The Transportation Department thinks they do, and it now requires carriers to disclose the information when customers search for fares online.
But in complying with the rule, the airlines have chosen very different ways of presenting the information, suggesting mixed feelings about revealing before the ticket is purchased that some flights consistently arrive late.
Continental includes a link next to each flight in its search results saying, “See On-Time Performance,” while JetBlue tells customers in big text at the top of the page, “Did you know you can click on a flight number to see its on-time performance?”
But US Airways, Delta and United Airlines do not even hint that this information is available. Customers have to know to click on or hover over each flight number to make that flight’s on-time record appear. American and Southwest Airlines, meanwhile, provide links that are easy to overlook.
“There’s a huge disparity in how airlines choose to display this information,” said Henry Harteveldt, a travel analyst with Forrester Research. “Those that aren’t up front about it unfortunately end up looking like they’re trying to hide something, even if that’s not the case.”
Whether passengers care if a flight has an 87 percent or a 62 percent on-time record is a continuing debate. When the Transportation Department first proposed the rule, the Air Transport Association, the airline trade group, argued that travelers were not interested in the data, even calculating that it would take 10 extra seconds to look at it. The group argued that the extra burden would drive customers to book tickets at online travel agencies, like Travelocity and Expedia, instead.
Those online agencies are not required to publish on-time data for the flights they sell. Nor are smaller airlines like Spirit or Virgin America, because they are not obligated to collect performance data and submit it to the Transportation Department.
The department uses the data to track the industry’s overall on-time record, which was 84 percent in October — the latest results announced last week. But that number includes data from only 18 airlines, and does not include flights operated by many regional carriers, which are more prone to delays.
By requiring the airlines to publish the on-time record for each flight they sell, including flights operated by their regional partners, the government aimed to give travelers information about a specific flight before they booked a ticket. The government also requires the airlines to publish the percentage of arrivals that were more than 30 minutes late and how often the flight was canceled (if it was canceled at least 5 percent of the time). The new rules, which took effect last summer, were included in federal passenger protections adopted by the Transportation Department last spring.
Despite the wide variation in how this information is presented, Bill Mosley, a spokesman for the department, said the airlines were all complying with the regulation, since providing a link to the on-time data was allowed.
But Mr. Harteveldt suggested that some airlines might be adhering to the letter of the law rather than its spirit out of business concerns. “I think the airlines are afraid that people will book away from certain flights,” he said.
The data does show there can be a wide variation in delays. Among the 20 flights US Airways offered in a recent search for a trip from Philadelphia to La Guardia Airport in New York, all for the same price on the same day, the on-time record ranged from 24 to 88 percent. Eleven of the flights had an on-time performance below 55 percent.
Jim Olson, a spokesman for US Airways, said the airline consistently ranked high in the government’s on-time statistics (which do not include many of the regional flights on the Philadelphia-to-La Guardia route), and did not highlight the on-time data on its Web site more prominently because customers did not consider that information a priority.
“We have not received a single complaint about this topic from our customers,” he said.
Since the numbers are based on data collected two months earlier, the airlines have argued that the information is not necessarily an accurate predictor of whether that same flight will have a poor on-time record several months later.
“It’s difficult to understand how looking at historical data helps you make a decision going forward,” said David A. Castelveter, a spokesman for the Air Transport Association. “The variables that affect flight performance change on a daily basis.”
And it may well be that having this on-time data does not affect booking decisions — although until more passengers know it exists, it is tough to gauge how travelers are using this information.
Michael Steiner, an executive vice president with Ovation Corporate Travel in Manhattan, said the agency provided on-time data for the flight options it offered to clients, but had found that most of its customers prioritized price and schedule instead.
“Do people want to know about on-time performance? Yes,” Mr. Steiner said. “Is it a factor when people are making connections? Absolutely. But I don’t know that it’s really changing behavior in a significant way.”
But Jean Covelli, president of the Travel Team, a travel agency in Buffalo, said her clients definitely cared about a flight’s on-time record and avoided flights that were regularly late.
“If you’re in a city where you have to connect, it’s way more relevant than if you’re in a big city with shuttle service,” she said. “You want to see on-time statistics at a minimum in the 70th percentile to feel like a flight is reliable.”
Source : http://www.nytimes.com/2010/12/14/business/14time.html?partner=rss&emc=rss