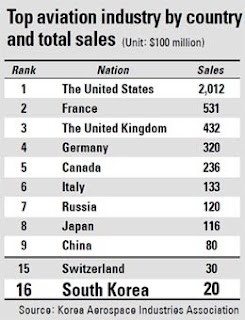 In a bid to develop the domestic aviation industry, the government laid out a specific plan yesterday based on a blueprint it had announced earlier this year to help it become one of the world’s top seven aircraft industry leaders by 2020. According to the Ministry of Knowledge Economy, the government will focus on securing key technologies and promoting research and development.
“We have selected 10 key aviation-industry-related technologies that the country should develop and acquire to be recognized as advanced in the field,” Cho Seok, deputy minister for new growth engines, said during a briefing yesterday at the government complex building in Gwacheon, Gyeonggi.
He noted that the ministry had made its selections by gathering opinions from industry leaders, universities and institutions. The selected technologies include aircraft design, passenger-seat comfort, flight safety, next-generation materials, and a highly efficient, eco-friendly promotion system.
As for R&D, several government bodies - including the Ministry of Knowledge Economy, the Ministry of Land, Transport, and Maritime Affairs, and the Defense Acquisition Program Administration - will be responsible for conducting studies to help Korea develop aviation products using domestic components. Projects will be done in different regions.
“Aviation manufacturing will be promoted in South Gyeongsang, while the maintenance, repair and overhaul sectors will be in Busan because that is where Korean Air has its main maintenance center,” Cho said.
The government had said in January that it would create $10 billion in aviation-related exports by 2020. Unlike the electronics, semiconductor and automobile industries, Korea’s aviation industry has been lagging behind that of other developed nations.
Korea currently ranks 16th in terms of global aviation industry sales, behind other Asian countries such as Singapore, China and Japan. Industry leaders include the United States, France, the United Kingdom, Germany and Canada, according to the Korea Aerospace Industries Association.
“The aviation industry is expected to thrive in the future, as demand for aircraft is increasing around the world. It has the potential to become a source of profit for Korea should it be prepared with key technologies and manufacturing skills,” said Lee Ok-hyeong, senior deputy director at the ministry’s growth-engine policy division.
Source : http://joongangdaily.joins.com/article/view.asp?aid=2928886