Boards flight as old white man, comes out as a young Chinese! 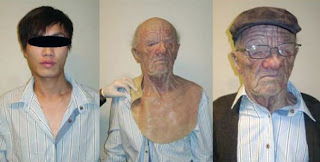 Toronto, Nov 6 (IANS) In a story that reads like a spy thriller, a young Chinese fooled customs and security at Hong Kong airport last week to board an Air Canada flight faking as an elderly white man and land in Vancouver to seek asylum.

But his mask was blown off halfway through the journey when he went into a toilet as an elderly, wrinkled man and came out as a young Asian man Oct 29. He was taken into custody on landing in Vancouver and is now under custody even as he has filed for refugee status in Canada.

Reports say the man managed to hoodwink airport security and immigration authorities in Hong Kong by wearing a prosthetic mask to make him look like a 55-year-old US citizen, who actually acted as his accomplice.

The older American passed on a boarding pass to the young masked man after he had cleared the initial security check-up. Clearing the final gate security check was no difficult as the masked man had the boarding pass from his accomplice white man. For his ID, he used an Air Canada Aeroplan card which doesn't need photo or date of birth.

According to a report in the Globe and Mail, the man's disguise consisted of a silicone mask that covered his head, neck and part of his chest. He topped it off with a brown cardigan and apple cap and a pair of spectacles.

Before he was exposed, the flight crew was also baffled that this elderly white man had rather young hands.

'The passenger in question was observed at the beginning of the flight to be an elderly Caucasian male who appeared to have young looking hands,'' the paper quoted the Canadian Border Security Agency (CBSA) as saying in its secret memo on the case.

But after his mid-air bathroom change-over when he came out as a young Asian, the Air Canada crew staff quickly alerted Canadian security agencies at Vancouver airport who took him in custody when he landed there.

The man admitted that he disguised as an elderly white man and mimicked his slow movement to fool multi-layered security in Hong Kong.

Air Canada spokesman Peter Fitzpatrick said the investigation is 'ongoing and the facts are not established.'