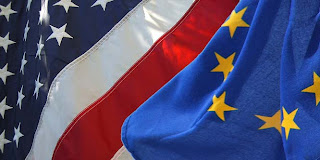 The European Union and the U.S. have sealed a preliminary agreement to cooperate on civil aviation research and development, the EU said Friday.

Under the deal, the EU and the U.S. will communicate on safety, security, performance, aircraft design and alternative fuels. They will also work together to modernize their air traffic management systems, with a view toward eventual standardization of these systems in both airspaces.

The preliminary deal must be approved by Europe's national governments and the European Parliament. Commission officials hope the agreement could come into force early next year.

Authorities from both sides of the Atlantic have been working for years to develop satellite-based navigation equipment that will enable pilots to fly more direct routes and provide controllers with advanced tools to safely handle many more planes in the same airspace.

Until now, the formal U.S. and EU efforts have been separate, though companies and government officials from both sides of the Atlantic have shared concepts. Industry officials have worried that the world's two biggest aviation markets could end up developing incompatible solutions, and airline executives have warned that they couldn't afford to install multiple systems to fly in different parts of the world.

The goal of NextGen and Sesar is to increase the capacity and safety of air-travel networks while cutting flight times and congestion. Using computerized guidance systems linked via satellites, aircraft will keep a safe distance from each other in the air, navigate around storms and even keep track of runway hazards. Planes will also be able to fly closer to each other on shorter, more fuel-efficient routes, which should cut emissions of greenhouse gases.