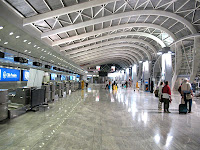 While the aviation industry may still be emerging out of the global economic downturn, with many carriers still suffering from reduced passenger bookings, it seems such money worries are not affecting some of the world's biggest airports.

Indeed, one of the biggest construction projects the world has ever seen, the building of the Al Maktoum International Airport in Dubai, is well on track.

The multi-billion pound airport, which will eventually boast five runways and be capable of welcoming as many as 160 million domestic and international passengers a year, has now welcomed its first test flight.

However, though the flight from Hong Kong only served to mark the opening of Al Maktoum as an air cargo hub, this latest development indicates that the economic crisis has not derailed the project, with initial projections that the airport will be the largest and busiest in the world by 2030 looking highly realistic.

It is anticipated that the first passenger flights will start arriving next March and Dubai's aviation industry chief Sheikh Ahmed Bin Saeed Al Maktoum has already outlined his plans to transform the emirate into the global "pre-eminent centre" for air travel, with the existing Dubai International already having established itself as a major hub for long-haul travellers.

Meanwhile, again highlighting the rise and rise of the Asian aviation sector, work is now being carried out on revamping Taipei's Songshan Airport in Taiwan.

From being little more than a small-scale regional airport just a few years ago, Taiwan president Ma Ying-Jeou has outlined his vision of turning it into one corner of the "Golden Triangle of Business" within north-east Asia, the Asia Times has reported, offering daily international flights both to Seoul and Tokyo, as well as to Shanghai and Beijing.

As well as improving facilities for airlines, work is currently being carried out on improving customer services at Taipei, including revamping the luggage reclaim system and further improving links to the heart of the sprawling metropolis.

At the same time, and proof that it's not just the Asian aviation industry that is keen to invest in the future, the new owners of Gatwick Airport have announced their plans to drop the 'London' prefix as part of a £1.5 billion brand revamp.

According to chief executive Stewart Wingate, while much of the money is to be spent on cosmetic changes such as a new logo, more concrete adjustments are also set to be made, not least the modernisation of check-in facilities and a new shuttle bus service between the terminals as the airport moves away from its reputation as being an unloved relic of the 1970s.