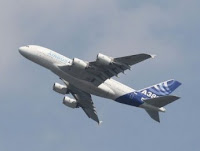 Dubai airline Emirates announced on Tuesday an order for 32 A380 "superjumbos" for 11.5 billion dollars, the biggest contract in civil aviation history according to the aircraft's maker Airbus.

The A380 order, which takes to 90 the number ordered by Emirates, "shows our confidence in the future growth" of the airline industry, chief executive Sheikh Ahmed bin Saeed al-Maktoum said at the Berlin Air Show (ILA).

"It's the largest order ever placed for civil aircraft by dollar value based on catalogue prices in aviation history," said John Leahy, chief commercial officer at Airbus.

Emirates was the first airline to order the huge A380, which was the main attraction at the ILA starting on Tuesday. It has already taken delivery of 10 of the aircraft.

Franco-German Airbus, the arch rival of US giant Boeing, has gone months without receiving any confirmations of orders for the A380 or any new contracts for the plane as airlines have wrestled with the global recession.

Louis Gallois, chief executive of parent company EADS, said in a recent media interview that orders for the A380 would not properly take off again until 2011 or 2012 as airlines put the downturn behind them.

The International Air Transport Association (IATA) provided some cheer on Monday with a prediction that the sector should be profitable this year for the first time since 2007.