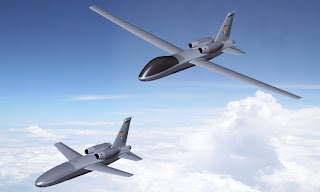 The CEO of EADS' defense and security division said Wednesday that the European company will keep financing its drone project until cash-strapped governments are able to commit.


EADS will keep ploughing its own funds into the project because to fall behind in this technology would mean being excluded from large parts of the defense industry, Stefan Zoller told The Associated Press.

The unmanned aerial vehicle or UAV business is currently dominated by the U.S. and Israel.

"The Talarion is the solution to stay in military airborne systems," he said in an interview at the Eurosatory defense trade fair outside Paris.

"You give that up you would loose the industry thereafter. Once you loose airborne military systems, what will be the consequences for sensors, avionics, for ground stations, for data links and so on? That's why I say we are at a crossroads."

Zoller had threatened to put the Talarion unmanned aerial vehicle program on hold if Germany, France and Spain didn't place firm orders by summer, when EADS will make a preliminary design review.

But he said that EADS has come to terms with the fact that government coffers are empty.

"The shortage of budgets is a reality, it's something we have to accept," he said. "Therefore I have to envisage for still a while EADS has to pre-finance further."

He said he hopes for a political commitment from the three governments — and possibly Turkey which has expressed an interest — but declined to set a deadline.

Airbus and its parent company EADS are still recovering over a funding standoff with European governments over their A400M military plane. Although all parties reached a deal in March that allowed the over-budget and much-delayed project to continue, EADS is still negotiating with the seven customer countries to finalize details.

On Monday, French Defense Minister Herve Morin said he had sent an official to the U.S. over a possible drones buy, saying France wanted to have all options on the table.

"I can't imagine that the interest of Mr. Morin is to make the European military air systems industry collapse," said Zoller.

The total cost of the program is estimated at euro1.4 billion ($1.7 billion), but Zoller said that could go up or down depending on customer requirements.

He said he doesn't want to push back the 2017 in-service target date and there are currently sufficient engineers working on the project.

EADS unveiled its Talarion unmanned air vehicle at the Paris air show last June. The name derives from the winged sandals of Hermes in Greek mythology.