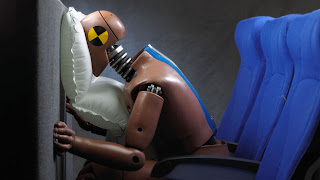 Cathay Pacific Airways Ltd. and Air France-KLM Group have begun introducing seatbelt-mounted airbags in their economy-class cabins as authorities tighten regulations aimed at reducing the risk of fatalities in plane crashes.
All aircraft built in the U.S. since October must conform to standards designed to keep passengers conscious through an impact involving deceleration at 16 times the force of gravity so that they can escape any subsequent fire. The same rules will be introduced in Europe by the end of next year, European Aviation Safety Agency spokesman Jeremie Teahan said.
While many seats comply with the so-called 16g rule without needing airbags, which are installed in about 2 percent of seats, manufacturer AmSafe Inc. predicts they’ll become standard by 2020 amid heightened awareness of safety issues. The devices cost about $1,200 apiece, versus $25 for a regular seatbelt.
“The problem with our economy seats is that they have rigid shells and a head impact is more difficult to handle,” Cathay Pacific Chief Executive Officer Tony Tyler said in an interview in Berlin. “Therefore we need airbags.”
About 80 percent of plane crashes are survivable, and a study of 25 impact-related accidents by the U.K.’s Civil Aviation Authority for the U.S. Federal Aviation Administration in 2005 concluded that stronger seats and better restraints could have averted 62 fatalities.
The world’s airlines have a total capacity of 2.8 million seats, according to Dunstable, England-based OAG, which gathers statistics on the global aviation industry.
Jumbo Exempt
Safety rules for seats introduced in the U.S. in 1988 and Europe in 1992 applied only to new models, exempting planes including the Boeing Co. 747 jumbo jet and Airbus SAS A320 that were introduced earlier but are still in production today. Under the stricter rules, all new-build planes must be 16g compliant.
AmSafe’s airbags are stored in the seatbelt and inflate within 90 milliseconds of a crash, expanding up and away from the passenger to accommodate head movement in all directions.
The Phoenix-based company, which also makes 95 percent of all aircraft seatbelts, introduced the technology in 2001 and says it has been sold to more than 50 carriers including Singapore Airlines Ltd., US Airways Group Inc., Emirates, Japan Airlines Corp. and Swiss International Air Lines AG.
Airbags are required for standard berths where there is no seat in front to cushion against an impact, such as those facing bulkheads, galleys and lavatories, and for premium-class layouts where seats are angled to face into the aisle, Bill Hagan, the president of AmSafe’s aviation unit, said in an interview.
Fixed Back
Hong Kong-based Cathay Pacific became the first carrier to equip whole planes -- Airbus A340s and Boeing 777s -- with airbags, allowing it to use a “shell seat” design from BE Aerospace Inc. that didn’t otherwise comply with regulations, Hagan said. The berth, introduced in coach class in July 2008, has a fixed back that doesn’t move even when reclined, helping to protect personal space, according to the Cathay website.
Air France-KLM, Europe’s biggest airline, has fitted airbags after installing the same seats in the premium-economy cabins of its 777 jetliners, spokeswoman Brigitte Barrand said by telephone. About 2,200 berths are involved, Hagan said.
Air France considered using airbags in the past but concluded that the potential disadvantages of accidental inflation outweighed the benefit of greater cushioning, according to CEO Pierre-Henri Gourgeon.
Swiss International was also required to fit airbags in the business-class seats of its A330-300s, which entered service in April last year, spokeswoman Sonja Ptassek said. The unit of Deutsche Lufthansa AG will have 10 of the planes by March.
‘Critical Footprint’
Hagan says the client base for AmSafe’s airbags has almost doubled from a year ago and that the company is in talks with “major North American carriers” on equipping entire planes with the product, with deals likely to close in 2011.
“The real driver until now has been the premium segment,” Hagan said. “But at a certain point you gain a critical footprint where airlines consider extending airbag use across the plane. I believe this point will be reached next year.”
Still, the International Air Transport Association, which represents airlines worldwide, says it isn’t sure about the wider application of the technology beyond specific cases.
“We’re investigating whether airbags make sense,” Guenther Matschnigg, IATA’s senior vice president for safety, operations and infrastructure, said in an interview. “We need to have numbers before we take any stance.”
IATA will probably make recommendations to the European Aviation Safety Agency later this year, Matschnigg said in Berlin where, like Tyler and Gourgeon, he was attending the group’s annual meeting.
“If anyone can prove that airbags make a difference, we’ll be the first to recommend them,” he said.