The Southwest Airlines jet forced to land last week after a gash opened in its fuselage had made an average of seven flights a day over its 15 years of service -- a demanding schedule for any jetliner.
Federal Aviation Administration officials disclosed Tuesday that the Boeing 737-300 had flown 48,740 hours over its lifetime and gone through 39,781 flight cycles -- takeoffs and landings that tend to place the most stress on a plane's fuselage along with changes in cabin pressures.
Aviation experts had initially speculated that the wear and tear Southwest planes typically  endure -- making an average of six flights per day -- contributed to the incident. Southwest is the leading low-cost carrier in an industry that is highly competitive. 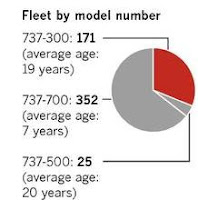 Flight 812, bound from Phoenix to Sacramento, had 118 passengers aboard when it made a safe emergency landing in Yuma, Ariz., Friday. There were no serious injuries.
After the incident, Southwest cancelled about 630 flights and inspected its 78 Boeing 737s, finding five others with fuselage cracks. The airline resumed normal flight operations Tuesday.
Also on Tuesday, the FAA ordered all airlines to conduct detailed inspections within five days of older model Boeing 737-300s, 400s and 500s that have logged more than 35,000 flight cycles. The directive also requires airlines to check heavily-used 737s before they reach 30,000 cycles and orders that the older planes, which are mostly owned by Southwest, be re-inspected every 500 cycles.
Paul Richter, chief project engineer for 737s at Boeing, said during a media briefing that the fatigue cracks suspected in the Southwest rupture occurred sooner than Boeing expected in the life of the plane. The company also issued a service order instructing airlines to check their planes.
FAA officials estimate that about 175 planes will be affected worldwide, including 80 in the United States. Domestic airlines must comply with the directive, whereas foreign carriers often honor the orders voluntarily.