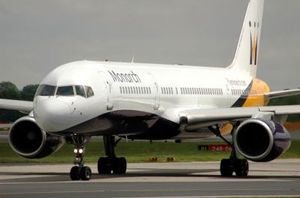 The world's greenest airlines have been named at the ITB Berlin travel show, with European carrier Monarch topping the list.

The study of airline efficiency was conducted by Atmosfair, a carbon offsetting company, and looked into factors such as how efficient an airline's fleet was and how full its planes normally fly.

Monarch, a charter and scheduled airline operating predominantly from the UK, was judged the world's most efficient airline, with Atmosfair praising its efficient aircraft and high seating density.

Although the airline index covered 92 percent of global air traffic, it deliberately excluded budget carriers because of problems with comparing them on an equal footing, most obviously because low-cost carriers often receive subsidies and fly to airports further away from cities, causing additional emissions.