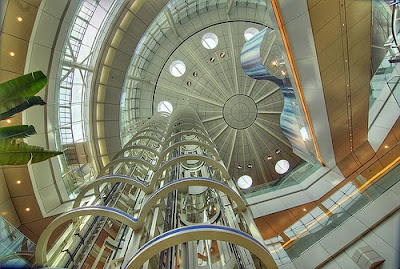 Tokyo's Haneda Airport is enjoying a surge in passenger and freight volumes since the opening of its international terminal three months ago, stepping up its presence as a regional hub.
Three months have past since Haneda Airport resumed regular international flights for the first time in 32 years.
Thanks to its accessibility from central Tokyo and smooth connections with domestic flights, the airport now has twice as many international passengers as the same period last year, when most international services available at the airport were chartered flights to China and South Korea.
Furthermore, the volume of international freight transport here has jumped fivefold from a year earlier.
With American Airlines, Delta Air Lines and British Airways set to start operating their respective flights to North American cities and London later this month, Haneda Airport is expected to play a bigger role as Asia's hub airport.
Nowadays, Haneda's new international passenger terminal is full of a vibrant atmosphere on Friday nights as a total of nine international flights to North American and Southeast Asian cities depart from the airport at around midnight one after another. There are a lot of passengers who catch the last plane of the day from regional airports and make their international connections here.
According to the Ministry of Land, Infrastructure, Transport and Tourism, a total of 560,000 people departed from Haneda Airport for overseas destinations in November 2010 -- 2.3 times as many passengers as the same period a year earlier.
Roughly one fourth of all passengers on All Nippon Airways' four midnight flights to Los Angeles, Honolulu, Bangkok and Singapore are transit passengers mostly from Sapporo and Fukuoka, according to the company.
"Midnight flights are becoming popular as they allow passengers to make better use of their time at their destinations," said an official with All Nippon Airways (ANA) of the revival of Haneda Airport, which had lost many passengers to more convenient Incheon International Airport in Seoul.
ANA says its international flights from the airport were at 85 percent capacity in November and December last year, surpassing the average figure for the company's overall international flights by slightly over 5 points. The number of passengers taking ANA international flights from Haneda Airport has exceeded the company's forecast by about 10 percent.
Due to its accessibility to central Tokyo, the airport is also enjoying a steady increase in business travelers. Most of Japan Airlines (JAL)'s flights to South Korea, Hong Kong and Taiwan were booked to around 90 percent of capacity in November and December 2010.
"A lot of people make late bookings due to unexpected business trips, resulting in an increase in average sales per customer," a JAL official said.
Along with the opening of the new international terminal, a new storage facility capable of controlling room temperatures 24 hours per day has been constructed at the airport's Tokyo International Air Cargo Terminal (TIACT), enabling Haneda Airport to export fresh produce, such as marine and agricultural products.
For example, fresh fish landed in Japan's southwestern island of Shikoku will be available at a Japanese restaurant in the United States the next day if transported by air from the island via Haneda Airport.
Before the introduction of the fresh food storage system, maritime products from Shikoku were transported by truck to the city of Fukuoka to be exported from the international airport there. By airfreighting fresh products directly to Tokyo, the time required for transportation has been reduced significantly.
In December last year, the volume of international freight at Haneda Airport increased fivefold from a year earlier to 7,500 metric tons.
But as the total international freight volume at Haneda is only 5 percent of the volume at Narita International Airport, there still is considerable room for growth.
TIACT President Hiroshi Yokoyama says the new food storage system is capable of storing a lot more goods.
The company is hoping to tie up with regional airports without international flight services in Hokkaido, and the Hokuriku and Sanin regions, in a bid to promote exports of high-value-added local products such as fruit.
While Haneda Airport enjoys strong growth in international passengers and freight volumes, Narita International Airport in Chiba Prefecture saw the number of passengers decline to about 2.14 million in November 2010, marking a year-on-year drop of some 400,000 people.
In an attempt to prevent the number of international flights in the Tokyo metropolitan area from exceeding demand, JAL has shifted all its Tokyo-San Francisco flights from Narita to Haneda, while ANA has introduced smaller planes for all international flights from Narita to destinations that are also accessible from Haneda. The company has reduced the number of seats from Narita to the overlapping destinations by 20 percent through these measures.
In search of new business opportunities, Narita International Airport Corp. (NAA) is planning to attract more low-cost air carriers to the airport.
In late January, NAA President Kosaburo Morinaka attended an international meeting of low-cost carriers held in Singapore to meet with executive officers of Asian budget airlines for possible future operations at Narita airport. The company plans to compile a project outline by the end of March, taking into consideration the construction of a new terminal for discount carriers.
Furthermore, NAA hopes to maintain its presence as a hub airport by inviting private jets.
By fiscal 2013, the number of departure and arrival slots for international flights at Haneda Airport is scheduled to increase by 50 percent from the current level to 90,000 per year, while the figure is also set to increase 1.4-fold for Narita International Airport to 300,000 annually.
Source:http://mdn.mainichi.jp/features/archive/news/2011/02/20110202p2a00m0na018000c.html