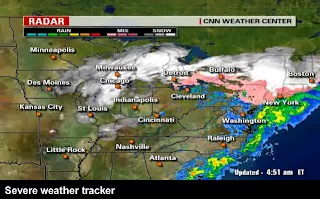 Airlines canceled thousands of flights for a second day and began to regroup as a historic winter storm pushed through the upper Midwest and into the Northeast on Wednesday.
O'Hare International Airport was expected to have limited or no flight operations as up to two feet of snow was forecast to fall on the Windy City, said Karen Pride, a spokeswoman for the Chicago Department of Aviation. More than 1,300 flights were canceled on Tuesday.
At Chicago's Midway Airport, airlines canceled flight operations on Tuesday. The carriers expect to begin operating again on Wednesday afternoon, although most weren't likely to resume before evening, Pride said.
Both Chicago airports remained open despite the grounding of flights. Hundreds of cots were made available to passengers stranded by the storm, according to Pride. Some concessions were to remain open to accommodate them.
Airlines canceled more than 4,000 flights on Tuesday as the massive storm surged out of the southern Plains, spreading snow and ice from Texas into the Ohio Valley.
"It's going to take days to clear out this storm," said CNN meteorologist Jacqui Jeras. "This is a monster."
It was also slow going at other airports.
Dallas-Fort Worth International reopened late Tuesday morning after shutting down for several hours because of ice, spokesman David Magana said.
American Airlines canceled about 1,900 flights for Tuesday, 800 of those at Dallas-Forth Worth alone. The carrier is also scrubbing more than 1,000 flights for Wednesday.
American Airlines is allowing travelers who are scheduled to fly on Monday through Thursday from more than 30 airports in the Midwest -- including those in Chicago, Detroit and Milwaukee, Wisconsin -- to change their plans without penalty.
Southwest Airlines canceled more than 900 flights on Tuesday, according to spokeswoman Marilee McInnis, who said hundreds of flights will likely be grounded for Wednesday.
Passengers with reservations for travel through Chicago, St. Louis, Detroit and other cities are eligible to reschedule their flights.
AirTran Airways scrubbed 185 flights for Tuesday and has canceled another 75 flights on Wednesday, spokesman Christopher White said.
AirTran passengers traveling through two dozen cities in the region -- including Chicago, St. Louis and Boston -- can change their reservation without penalty.
Delta Air Lines canceled 625 flights for Tuesday and was grounding at least 800 more for Wednesday.
Ahead of the storm, Delta issued a winter weather advisory for the northern United States. Passengers traveling to airports in 20 states through Friday can reschedule their itineraries without a fee or get a refund if their flights are canceled or significantly delayed.
Continental Airlines, which canceled 650 flights, will allow changes for travel to, through and from nearly three dozen airports, including the airline's hubs in Newark in New Jersey and Cleveland for travelers scheduled to fly through Thursday.
Continental said operations at Newark airport would be suspended through noon Wednesday.
US Airways has also relaxed its change-fee policies for passengers scheduled to fly through Thursday to or from 27 cities from Portland, Maine, to Akron, Ohio.
Travelers on JetBlue flights to and from six cities and metropolitan areas in the Northeast on Tuesday and Wednesday will also be able to change their plans with no fees.
United Airlines, which canceled 800 flights, has issued travel waivers for passengers traveling to, from or through 19 states in the Midwest and Northeast as well as five Canadian cities. Travelers will be able to alter their plans without fees or get a full refund if their flight is canceled.
Source : http://edition.cnn.com/2011/TRAVEL/02/02/snow.storm/