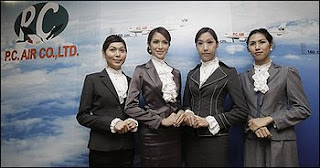 Four Thai "ladyboys" have been recruited as flight attendants for a start-up charter airline that says it will be Thailand's first to include transsexuals among its cabin crew.

P.C. Air, which will fly to several Asian destinations starting in April, had its first training session this week for 30 recruits, including four from "the third sex."

Thailand is known for its tolerance for transvestites and transsexuals, known locally as "katoeys" or "ladyboys." An annual transsexual beauty pageant is broadcast nationally, and Thai doctors' well-honed skills at the snipping and reassembling needed to switch genders - not to mention bargain prices - have made Bangkok a sex-change capital.

But while katoeys are prominent in entertainment, frequently appearing on television series and in cabaret shows, other job opportunities are limited.

"I had applied to many airlines and was repeatedly turned down. They said because I was a transsexual, not a real woman," said Phuntakarn Sringern, 24, from Bangkok. "This is the first time somebody told me to come as I am and put on my best dress."

Company president Peter Chan, 47, who worked as a flight attendant for 10 years, said he doesn't "see any reasons we cannot let ladyboys work as flight attendants" as long as his carrier complies with civil aviation laws.

"I think it's time for the Thai society to be more open and support freedom of all sexes," he said.

"For ladyboys, we have to spend more than one day with them to make sure they can keep their feminine personalities. Their voices and their postures must be naturally feminine and they must be very patient," he said.

Becoming a flight attendant has long been the dream of Dissanai Chitpraphachin, 23, a native of Mahasarakam province in Thailand's rural northeast and a former winner of the Miss Tiffany pageant for transsexuals.

"When I was young, I couldn't take my eyes off those nicely dressed ladies in the airline commercials every time they came on the screen," Dissanai said. "I simply want everyone to open up their hearts and judge us by our work, not because of our sex."