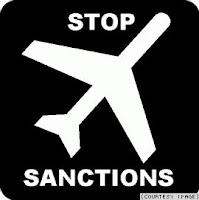 About 25,000 Iranians have reacted to last week’s crash of Iran Air flight 277 by joining an online protest against sanctions that prevent Iran from purchasing new aircraft and spare parts.
The protesters believe sanctions undermine aviation safety standards and are therefore to be blamed for a string of air accidents that have claimed the lives of hundreds of Iranians.
Seventy-seven people were killed on January 9 when a passenger plane with some 105 passengers and crew aboard crashed in northwestern Iran. The Boeing-727 plane, which according to Iranian media was 37 years old, broke into pieces when it attempted to make an emergency landing in a snowstorm near the city of Orumiyeh.
It was the latest in a series of air crashes blamed on Iran’s aging air fleet, which reportedly uses spare parts bought on the black market or taken from older aircraft. Experts have said that U.S.-imposed sanctions prevent Iran from updating its 30-year-old American aircraft.
According to "The New York Times,” a 2005 report by the International Civil Aviation Organization had warned that “U.S. sanctions against Iran were placing civilian lives in danger by denying Iranian aviation necessary spare parts and aircraft repair.”
The Facebook protest titled "Stop sanctions against selling passenger airplanes to Iran” blames the sanctions for the death of hundreds of Iranians who have lost their lives in air crashes in the Islamic Republic in recent years. (Here's a Reuters timeline of plane crashes involving Iran since 2000.)
“Stop the sanctions against innocent people. Let people fly safely,” says the page that includes messages in Persian and English, from Iranians living inside and outside the country who have joined the protest.
Here are some of the messages:
During the past few years, claim by leading sponsors of sanctions against Iran has been that these are not targeted at Iranian people. As we all know, the reality is quite different. Recent crash of an Iran Air Boeing 727 with the loss of so many lives is a testimonial to the reality.
Iranian people should not be denied the safety of air transportation. They should not be denied the rights of reaching their destination securely without the fear of losing their lives on their journey.
Sanctions won't fix any issue! By not stopping this, US prove that they don't care about killing innocent people!! :(
Stop the inhumane sanctions against selling passenger airplanes to IRAN.
"Haven't you heard of the great Iranian poem by Saadi which has been placed on a plaque in the United Nations foyer...???!!!"
Human beings are members of a whole,
in creation of one essence and soul.
If one member is afflicted with pain,
other members uneasy will remain.
If you've no sympathy for human pain,
the name of human you cannot retain!
Here, the life of people is dirt-cheap.
One of the co-founders and organizers of the protest, 31-year-old Maryam Tehrani, an Iranian student based in Sweden, told Persian Letters the protest is aimed at bringing the issue to the attention of Western countries and decision makers.
“It’s the right of all to fly safely and securely. The sanctions are preventing Iranians from doing so," Tehrani said, while criticizing the international community for not paying attention to the high number of air crashes in Iran, which she blamed on sanctions. “No one seems to pay attention to the fact that innocent people are being killed in Iran as the result of sanctions. Is this what they mean by smart sanctions?”
Tehrani, who says she has received many messages of support from inside Iran, estimates that about 60 percent of those who have joined the Facebook cause are citizens from inside the country.
One Iranian man who has joined the protest blamed the Iranian regime and its actions for the sanctions but added that “innocent people” are paying the price.
“More than 70 people were killed including several children. Were they responsible for the actions of Iranian leaders? Am I responsible for Ahmadinejad’s actions? I’m also a victim. We all are,” said the 32-year-old man, who called for the removal of sanctions that he said are hurting the Iranian population.
Another organizer of the online protest, 28-year-old student Saeed Soheily, said the ultimate goal of the protest is the removal of sanctions that jeopardize aviation safety and endanger the lives of Iranians.
“U.S. officials keep saying that the sanctions are aimed at the government and not the Iranian people, yet these sanctions are endangering the lives of Iranian citizens, they’re not hurting the regime. So these sanctions basically violate the claims made by U.S. officials,” Soheily said in a telephone interview from London.
On January 16, the organizers of the protest have called on members to change their profile pictures on Facebook to a black-and-white logo of a plane that says “Stop Sanctions.”
-- Golnaz Esfandiari
Following-up : http://aviationreport.blogspot.com/2011/01/iranian-media-reports-72-dead-after.html
Source : http://www.rferl.org/content/thousands_of_iranians_join_online_protest_against_sanctions/2277654.html?page=1&x=1#relatedInfoContainer