Sex Flights Gets Grounded By The Civil Aviation Authority 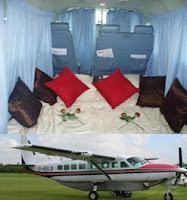 January 3, 2011 - United Kingdom's aviation regulator body the Civil Aviation Authority (CAA) has refused to recertify Mile High Flights, an air charter company located in Gloucestershire, a county in South West England for allowing its passengers to have sex while in-flight.
The Mile High Club (or MHC) is a slang term applied collectively to individuals who have sex while on board an aircraft in flight. The CAA reported that the in-flight sexual acts were too distracting to the pilots and posed safety concerns.
The term "Mile High Club" refers to two or more people engaging in sexual activity (sexual intercourse) at an altitude of no less than 5,280 ft (a mile high above the earth) in an airplane.
Mike Crisp who founded the company in 2008, reported “I'm not giving up on what was a popular business idea because someone at the CAA doesn't like the sound of what goes on in our plane.
"Joining the Mile High Club is something a lot of couples dream of and we were providing the chance to fulfill that particular fantasy. In our two years trading we had people from all walks of life wanting to join the club, from 21st birthday flights to 60th birthday ones."
Mile High Flights operates a Cessna C208 Caravan. The aircraft is fitted with a queen size bed in the rear of the aircraft. The company offers its passengers the option of two flight packages, “The Big One” at $854 for a 40 minute flight and the “VIP” for a 60 minute flight. In addition for a third person to travel along there is an additional passenger charge of $166.
Mile High Flights reports on their website that the fight time “will provide you and your partner ample time to indulge in your ultimate fantasies and experience an adventure fit for Hollywood.” The site also states once you arrive that the airport (Staverton) you will be greeted by the pilot who will answers questions, assist with boarding and provide safety instructions before takeoff. Once on aboard, the passengers are provided with chilled champagne and strawberries, an aphrodisiac. When airborne the pilot will inform the passengers when it is safe to engage in sex.
It appears that sex on an aircraft is becoming somewhat popular in the UK. One explanation for the club's allure is the vibration of the plane, which may make arousal easier. Others say they have fantasies about pilots or flight attendants, or a fetish about planes themselves. For many others, perhaps the majority, the appeal of joining the Mile High Club (MHC) is the thrill of doing something taboo and the thrill of the risk of being discovered.
There is no known formally constituted club so named. However, since "membership" of the "club" is really a matter of an individual asserting they have qualified, the qualifications for membership are open to some interpretation.
In November 2007 the BBC reported a story headlined "Airline Bans A380 Mile-High Club" about a measure taken by Singapore Airlines. The airline asked their first class passengers shortly after the introduction of their new Airbus A380 to respect the law. The twelve first class cabins have double beds, but are not soundproof.