Ryan air has recently launched another agressive campaign in Europe with cheaper than ever fares. In today's (01/11/2011) widely distributed French newspaper Le Monde, The 5th page was entirely covered with a huge ad for flights for 8€ taxes included with Ryan Air. The black and white advertisement might have cost even less as its design is really poor and built around the catchline : an immense '8€'. A small font line at the bottom of the page nevertheless warned that the offer was "only available until the 01/10/2011" as is customary with Ryan Air's noisy communication methods. In the same newspaper British airways had a quarter of a page for new Orly Heathrow flights and Air France had a very small banner commenting on the increase of its frequency to Berlin. Both ads were colored.

Is it true? On Ryan Air's website, we were able to book one-way flights from Lille to Barcelona and from Lille to Porto for only 6€ which is even cheaper than was announced by the airline. On the fare aggregator eDreams we found a flight from Paris Beauvais (a secondary airport that constitutes the hub of the company for Paris) to Krakow in Poland for 0 €. 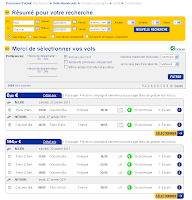 How can this happen? A few answers might help one understand where the money comes from since it's clearly not the ticket that pays for itself. First and foremost : these cheap trips are only for the lucky few who manage to book in advance, take holidays out of season and are flexible in terms of dates. They are designed as a very good way to create a buzz and attract attention with very little investment. It is a cheap but effective communication strategy, building a brand as the budget airline.
Ancillary revenues are another steady source of revenue at 9.59 € per passenger for Ryan Air in 2009. They include on-board sales of food and beverages, baggage check-in and excess baggage charges, seat assignment charges, fee charged for purchases made with credit card, commissions from sales made via airline website, travel insurance, sales of airport lounge access and airport advertising.
But where O'Leary's venture is a cataclysmic change in the airline landscape is in its ability to sell passengers. It is in fact the destination that pays to have tourists come to their resorts and businessmen trade in their regions. Hence the many remote airports - in less important cities or even far from anything - that host Ryan Air for almost nothing. Some regions even pay the company to come. Cataluña, the region surrounding Barcelona in Spain, openly buys tourist flows from Ryan Air. 'It is the way of the future, traditional carriers fail to see the point that Ryan Air is more effective and allows Barcelona's youth to tour Europe as no other generation ever could before' describes an attorney that works for the airline against its competitors who cry foul and call this hidden subsidies.
It is a well known fact that Air transportation is a deficit industry. Even when it is profitable, you would have better return on investment by placing money at the bank. What saves the industry is that it is considered as necessary for many other economic sectors such as tourism, culture, luxury goods, perishable goods... The IATA (International Air Transport Association) has even stated that it fostered peace throughout the world by enabling people to travel.
Only three decades ago, national airlines were subsidized by states. The notion of service was what drove the Air Transport World. Liberalization in the USA and in Europe led to things as they are now. The fact that 38% of air travel 20 years ago was flown by carriers that do not exist today can legitimize the question of the viability of the industry when it is not subsidized. Cyclical history or stillborn business model? Only time will tell.
By Thibaut Labarre (student at the ENAC National School for Civil aviation)