How legal action is enforcing security for civil aviation

Aeropro is a 22-year-old company that runs business and recreational charters.

It says it has 250 employees based out of the Quebec City airport.

The move by Transport Canada comes on the heels of an Aeropro plane crash near the airport last June that killed seven people.

An Aeropro spokesman says the company was disappointed by the court's decision and takes passenger safety seriously. 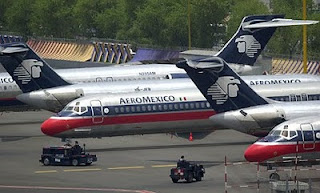 Mexico's aviation safety rating was downgraded Friday due to concerns about the country's safety oversight, the Federal Aviation Administration said.

The action won't stop flights between the two countries, but it will prevent Mexican airlines like AeroMexico and Mexicana from expanding service to the United States, the FAA said.

Mexican airlines also will not be able to carry passengers to or from the United States in so-called code-sharing agreements with U.S. airlines. Code-sharing means one airline puts its code or symbol on another carrier's flight and sells the seats as if the plane were its own.

Delta Air Lines Inc., the world's largest airline, has a code-sharing arrangement with Aeromexico, and AMR Corp.'s American Airlines has one with Mexicana.

"Our customers are still permitted to travel on AeroMexico, but must be rebooked with an AeroMexico flight number to do so," Landers said in a statement. The airline said it will work with the affected AeroMexico codeshare passengers so there is "minimal impact to their travel plans."

Passengers who bought tickets aboard an Aeromexico flight with a Delta flight number will have to be re-ticketed or booked on a Delta flight, Landers said. He added that the earning or redeeming of frequent-flier miles will not be affected because both airlines are members of the same SkyTeam alliance of global carriers.
American Airlines officials did not immediately respond to a request for comment.

Mexico's Communications and Transport Department said in a statement the demotion was due "exclusively to administrative and organizational matters" — a shortage of flight inspectors — and not a lapse in flight safety itself.

"The FAA measure does not imply any decline in the safety of civil aviation in Mexico," the department said. "Mexico's airlines are safe and will continue to offer high quality service, comparable to the highest international standards."

"While Mexico has been responsive to the FAA's findings and has made significant improvements in recent months, it was unable to fully comply with all of the international safety standards," the U.S. agency said in a statement.

The ratings are based international aviation safety standards, not U.S. regulations. The category 2 rating is usually the province of Third World countries, but the U.S. has previously downgraded other important allies, including Israel in December 2008. When the FAA takes such an action, it usually aims at the government regulation of aviation and safety and not at individual airlines.