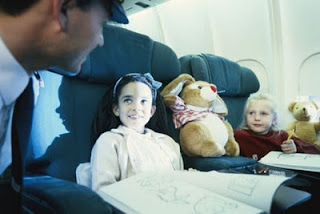 Air France cabin crew fear a new rule to protect children from paedophile passengers could expose youngsters to greater risk in the event of an accident, labour unions said Monday.

The airline issued instructions in February that unaccompanied minors must not sit next to adults unless a plane is fully booked, following complaints from parents that some had been molested in flight.

But the UNAC and Alter unions, which represent Air France cabin crew, said this rule contradicts previous advice that children must sit near responsible persons who can help them don oxygen masks if the cabin depressurises.

"This flies in the face of child safety," said Alter official Guillaume Pollard. "In an emergency or a depressurisation an adult should remain seated and fit a child's mask. How can they do this if they're across the aisle?"

A copy of the seating rules, seen by AFP, says children travelling without a parent or guardian must be given a block of seats on their own, with an adult in the next section across the aisle to keep an eye on them.

Several cabin crew, speaking on condition of anonymity, told AFP that they suspect Air France is more concerned about the possibility of lawsuits linked to alleged child abuse than by more general in-flight safety.

With 7000 unaccompanied minors a day that transit through Charles De Gaulle airport with Air France, this type of passenger is considered to be a startegic source of ancillary revenue where value is created in the safety of the trip.

Contacted by AFP, Air France would not say how many cases of alleged molestation had been reported.