The secret life of baggage: Where does your luggage go at the airport? 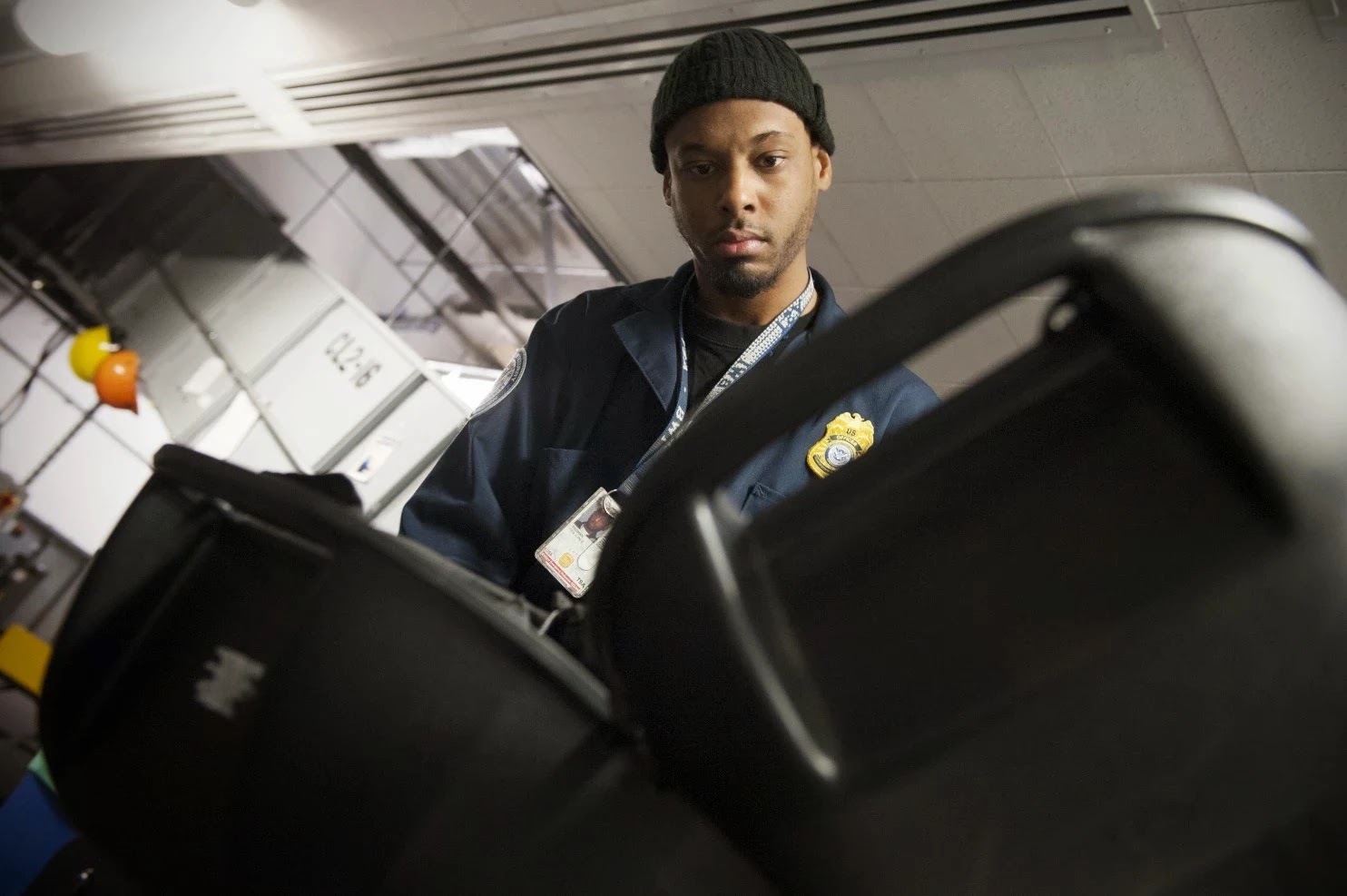 Memo to the lady with the hot pink luggage tag: The six cans of Libby’s pumpkin pie filling that you carefully knotted in that plastic supermarket bag for your flight to Australia are not going to explode.

And to the Boise, Idaho-bound photographer with the double-locked “Golf Guard” case packed with tripods, you couldn’t have squeezed a bomb or much of anything else in there if you tried.

By now you both know that your bags seemed suspicious enough to be tested for explosives by inspectors for the Transportation Security Administration before you flew Delta Airlines out of Baltimore-Washington International Marshall Airport recently.

The TSA leaves a calling card inside every bag it opens. Which isn’t many, and that’s a good thing, given that about 14 million checked bags will pass through TSA hands nationwide during the extended Thanksgiving holiday weekend, when an estimated 24.6 million people plan to fly.

Many will feel a palpable tremor of trepidation as they crowd around the baggage carousel, praying that their bag appears and fearing a visit to the dreaded missing-baggage-claim office.

Fewer bags go missing — and even fewer get touched by the TSA — than was the case before bar-coded tags. And the slick new systems to keep terrorist explosives off airplanes have reduced the need for agents to open them for further scrutiny.

“The TSA isn’t even touching the vast majority of these bags,” the TSA’s spokeswoman, Lisa Farbstein, says.

The question of how the TSA goes about its business behind the scenes at airports arose last month with an e-mail from an angry doctor. He had flown home to Mumbai via Los Angeles and Hong Kong. When his bag tumbled onto the carousel in India, his TSA-approved lock had been torn off and the bag was held together with packing tape.

Though he had flown about 10,000 miles — and there was no TSA card indicating that his bag had been opened by American screeners — he pointed the finger at the TSA, charging agency personnel with “arrogance borne of the certainty that no one will question them.”

Federal data shows that every month an average of 352 people question the TSA about real or perceived sins against their luggage.

What happens in Hong Kong or Mumbai may be a different story, but once you wave bye-bye to your bag at the ticket counter at BWI, and in most large U.S. airports, here’s where it goes:

After trundling along the conveyor belt for a bit, it descends into the labyrinthine system of the TSA.

And into the clutches of the Dickensian pack of thieves imagined by Dr. Mumbai?

Not likely. Sensors placed on the belt every few feet track the progress of a bag, setting off an alarm if a bag goes missing in the second or two that elapses between one sensor and the next.

The machinery has identified some bags that are too big (this might be your golf clubs) for what comes next. Those it sends down another belt to a TSA inspector with a bomb-detecting wand. Still bigger boxes (like the one with your bike in it) go down a different belt and are wrestled onto a steel table, where they are opened.

Most likely, however, your bag rumbles along toward a boxy beige device that looks a bit like the scanners you put your carry-on bag through, only about twice as big. As the bag approaches, something that looks like a rubber rumble strip gets it properly aligned, and a metal curb gives a shove if that fails.

The bag passes through something in the machine — called an Examiner 3DX — that resembles the rotating collar in a medical MRI system. The machine does two things: decides whether there might be a bomb inside, and sends a three-dimensional image of any suspect bag to a nearby control room.

Exactly what makes the machine worry that a bag may have a bomb?

“It’s sniffing it, so to speak,” Farbstein says.

A bag that has been cleared — a green light flashes the good news — heads on down the conveyor belt and back into the airline’s luggage system in the hope of getting on the same plane that you do. But when a bag emerges after drawing a red light or a white one — white is the machine basically saying “I dunno” — the bottom drops out of the belt and the bag moves to a lower conveyor.

Then the race is on.

Can the TSA inspector in the control room study the images of the bag flashing on the computer screen and in less than a minute make a definitive decision that it poses no risk?

If the answer is yes, the inspector pushes a button and your bag pops up to the conveyor taking all the green-lighted bags to the airline and your airplane. If the inspector sees something distressing or isn’t quite sure, your bag heads down the belt to the TSA inspection team.

A team member takes a look at the computer monitor to see what caught the control room inspector’s attention and then opens the bag.

It’s locked? No problem, Dr. Mumbai, the inspector has a key ring full of master keys for TSA approved locks. The photographer headed for Boise had two locks on the golf case containing his tripods, and both yielded readily to the inspector’s keys.

Whether it’s something in a case of tripods or six cans of pumpkin pie filling, the offending item is ferreted out. The inspector unknots the bag with the pie filling and pulls out the cans. Everything is tested with a swab that detects explosives.

Repacked, locks and straps snapped into place, the bag goes back onto the conveyor that carries it to the airline system, where bags are loaded onto carts that will be towed to the airplane.

A bag that gets green-lighted will zip from counter, through the TSA system and to the airline luggage cart in about five minutes. Bags that are opened take longer. How much longer depends on whether you are a careful packer or one whose bags spill stuff when opened. Locks slow things down too, and non-approved locks get sheared off with bolt cutters.

But few bags suffer the indignity of inspection. While the TSA doesn’t want to reveal exactly how many set off the alarm, one security official said it’s about 4 percent nationwide.

Each of the “sniffing” Examiner 3DXs can take the scent of 500 bags an hour. In the $38 million TSA baggage-handling area that serves Delta at BWI, three of the machines can handle 1,500 bags an hour. Southwest Airlines, BWI’s biggest airline, has six 3DXs.

You’re thinking, this sounds like things click along like a Swiss watch, so why didn’t my bag show up on the carousel when I flew home for Thanksgiving last year?

For starters, bad luck. The number of bags that get lost — or “mishandled,” as the federal Transportation Department prefers to call it — has been cut by more than half in the past seven years.

Volume also could be a factor during peak travel times. Last year, BWI scanned 97,243 checked bags the week before Thanksgiving, 118,787 Thanksgiving week and 108,249 the week after Thanksgiving.

There also are a few irksome things that can go wrong in one of the TSA’s “in-line” baggage systems, like Delta’s at BWI and those at 118 other big airports.

A bag refuses to align properly for the scanner. A bag is placed on the belt with its wheels down so it squirms around, causing confusion for the bags behind it. A bag’s strap or name tag gets snared in a belt.

Crunch, and there’s suddenly a jam all the way up the line.

“We can go a whole day without one,” said Kristin Katz, the TSA’s liaison with the airlines at BWI. “Then we can have numerous jams in an hour.”

Even with workers standing by to clear jams, several within an hour can muck up the system and make bags late for their flights.

And on some flights, baggage raises more red flags than others. “At JFK in New York, with Air India, virtually every bag alarms,” Farbstein says. “They bring home — bless their hearts — things for friends, families, everybody.”

Memo to Dr. Mumbai: The TSA has keys for that lock you think they ripped off. There’s a stack of TSA calling cards next to every station where they open bags. (Just check with the pumpkin pie lady or the Boise photographer.) Your bag passed through airports in Hong Kong and Bombay bearing a big “Priority baggage” sticker that some might see as an indication it contained something important. But you point a finger squarely at the “shocking and shameful” conduct of the TSA? Hmmmm.