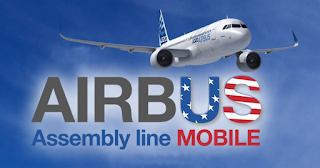 European aerospace giant Airbus will build its first airplane factory in the U.S., aiming to compete better against archrival Boeing in the battle to dominate the global aviation industry.
The Mobile, Ala., factory — due to start up in 2015 —is expected to employ 1,000 people when it reaches full production two years later. Airbus hopes the plant will lower costs and improve its chances of winning business from the U.S. military. Last year, Boeing beat out Airbus' parent for a major Air Force contract.

"We needed to be visible in the States under the Airbus flag," Airbus President and CEO Fabrice Bregier said.

The new $600 million plant will make A320 passenger jets, which compete head-to-head with Boeing's 737. Those planes are the minivans of the airline world — widely-used people-haulers generally flown on short- and medium-haul trips. They generally carry about 150 passengers.

North America is the biggest single market for that type of plane, Airbus executives said, and they want more of it. Boeing's 737 has an advantage now, with Southwest and Alaska Airlines buying only 737s. Current A320 customers include US Airways and Frontier Airlines. American Airlines handed Airbus a victory when it ordered 260 of the planes last year.

Airbus, based in Toulouse, France, cranks out more than 400 of those jets a year, more than any of its other planes.

The new plant advances the company's strategy of expanding production outside its home base. The Mobile operation will join assembly plants in Toulouse, France; Hamburg, Germany; and Tianjin, China.

Labor costs are likely to be lower in Alabama, where union organizing is more difficult than in Europe or in other parts of the U.S. Bregier said cost savings were not the main goal for the Alabama plant, but added, "Clearly we selected a competitive environment."

Building in Alabama helps Airbus cut foreign-exchange costs, as well. Most A320s are built in Europe, so costs are in euros. But planes are sold in dollars because most aviation lending happens in dollars. That cost disadvantage will shrink if Airbus pays to assemble at least some of its planes in dollars.

The deal should help Airbus politically in the U.S., said sales chief John Leahy, in an interview.

"Having an assembly line clearly gets you political support, a lot, in fact," he said. "There's no reason, now that we've become a U.S. manufacturer, that we shouldn't have equal treatment with Boeing," he said.

Barclays analyst Joseph Campbell said Airbus and EADS may be looking ahead to a day when they have a larger defense presence in the U.S. A factory employing Americans who make commercial airplanes may help it.

He downplayed the idea that building A320s in the U.S. will help the company sell more of them to American carriers. "United Airlines doesn't care if the airplane comes from Alabama or Toulouse," he said.

Alabama has been pursuing Airbus for several years, as it threw its weight behind the EADS effort to build the Air Force tanker. Unemployment in the state is 7.4 percent, so the Airbus announcement was welcome news. Two thousand people attended the Monday announcement at the convention center in Mobile, many of them waving American flags as music played.

Alabama offered the company $158 million in incentives such as road improvements and worker training.

Mobile is already home to several aerospace companies, including ST Aerospace Mobile, Goodrich Aerospace and Star Aviation, and much of the business is based at the 1,650-acre Brookley Aeroplex, where the new plant will be based. The aeroplex was an Air Force base until its closure in 1969.

Airbus plans to eventually make four planes per month in Alabama. It is in the midst of speeding up worldwide A320 production to 42 per month.

Airbus said sections of the plane will be built at its other factories and shipped to the port in Mobile, where they will be trucked to the new assembly line. The line itself will be a carbon copy of other Airbus lines, reducing startup expenses, the company said.

The dean of the business school at the University of South Alabama, Carl Moore, said attracting a company like Airbus could have a transforming effect on Alabama like Mercedes-Benz had when it picked Alabama for its first American assembly plant in 1993.

Other big manufacturers have found homes in the South. Boeing assembles 787s in North Charleston, S.C., and Alabama is home to plants owned by Mercedes-Benz, Honda, Hyundai and Toyota.

Airbus already employs about 1,000 people in the U.S., including about 230 in Mobile who design and install interior items such as seats and cabin equipment for its big planes.