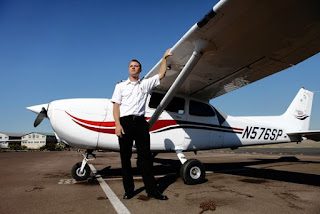 U.S. airlines are facing what threatens to be their most serious pilot shortage since the 1960s, with higher experience requirements for new hires about to take hold just as the industry braces for a wave of retirements.

Federal mandates taking effect next summer will require all newly hired pilots to have at least 1,500 hours of prior flight experience—six times the current minimum—raising the cost and time to train new fliers in an era when pay cuts and more-demanding schedules already have made the profession less attractive. Meanwhile, thousands of senior pilots at major airlines soon will start hitting the mandatory retirement age of 65.

A rule requiring new airline pilots to have at least 1,500 flying hours will postpone the day flight instructor John Adkins, above, can join a carrier.

Another federal safety rule, to take effect in early 2014, also will squeeze the supply, by giving pilots more daily rest time. This change is expected to force passenger airlines to increase their pilot ranks by at least 5%. Adding to the problem is a small but steady stream of U.S. pilots moving to overseas carriers, many of which already face an acute shortage of aviators and pay handsomely to land well-trained U.S. captains.

"This is going to come to a crisis," said Bob Reding, recently retired executive vice president of operations at AMR Corp.'s AAMRQ -2.70% American Airlines and now a consultant to FlightSafety International Inc., an aviation training provider.

Added Kit Darby, a consultant on pilot-hiring trends: "We are about four years from a solution, but we are only about six months away from a problem."

Estimates differ on the problem's magnitude. Airlines for America, a trade group of the largest carriers that collectively employ 50,800 pilots now, cites a study by the University of North Dakota's aviation department that indicates major airlines will need to hire 60,000 pilots by 2025 to replace departures and cover expansion.

Mr. Darby's firm calculates that all U.S. airlines, including cargo, charter and regional carriers, together employ nearly 96,000 pilots, and will need to find more than 65,000 over the next eight years.

In the past eight years, not quite 36,000 pilots have passed the Federal Aviation Administration's highest test, the Air Transport Pilot exam, which all pilots would have to pass under the congressionally imposed rules.

For passengers, the biggest impact is expected to be at smaller, regional carriers. They have traditionally been a training ground feeding pilots to the bigger airlines, which are expected to step up their poaching.

"Absent a game-changing shift in the supply of" pilots, small to midsize communities "are in jeopardy of losing some, if not all, their scheduled flights," Roger Cohen, president of the Regional Airline Association, said in a July speech.

More than half of U.S. airline pilots are over 50, said Mr. Darby, the consultant, reflecting a bulge in new hires in the 1980s and scant hiring over the past decade.

In 2007, to bring the U.S. into alignment with some other countries, regulators extended the mandatory retirement age to 65 from 60. By some estimates, 80% of 60-year-old U.S. pilots now are staying on longer. But in December, the first of those who extended their careers will start turning 65.

Capt. John Silverman, a 64-year-old US Airways Group Inc. LCC -3.15% pilot, stuck around when the law changed but must retire in April. "I'm extremely healthy," he said. "I could do more time. But 65 is plenty."

The FAA's head of flight standards, John Allen, said at an industry conference this summer that the projected retirement numbers are "astounding and dramatic" and "we don't have a system to address this issue." A spokeswoman for the FAA said its official position is "to obtain data to determine long-term pilot staffing needs and solutions."

After a decade of consolidation and restructuring, some large carriers are planning to start hiring again. Delta Air Lines DAL -0.97% Inc. estimates it will need 3,500 new pilots over the next decade to maintain its ranks at 12,000, not including any growth. American Airlines recently said it plans to add 2,500 pilots over the next five years. United Continental Holdings Inc. UAL -0.85% has begun taking applications for a few positions in its Continental subsidiary.

Dave Barger, chief executive of JetBlue Airways Corp., JBLU -1.67% said in an October speech that the industry is "facing an exodus of talent in the next few years" and could "wake up one day and find we have no one to operate or maintain those planes."

There are limits to the ability of airlines, especially the regional carriers, to attract more pilots by raising wages. While the industry's health has improved in recent years, many carriers still operate on thin profit margins, with the airlines sandwiched between rising costs for fuel and unsteady demand from price-sensitive consumers.

Dan Garton, chief executive of AMR's regional American Eagle unit, said the issue "is going to become much more visible when regionals have to decrease their flying" for lack of pilots, and some smaller cities lose air service.

Mr. Garton said he has beaten the drum about the problem on Capitol Hill and at the FAA without success. The FAA said it has been encouraging discussions among industry officials to come up with solutions.

Some regulators and industry experts worry about the safety implications of having a smaller pool of applicants at a time when demand for pilots is rising. They fret that some smaller airlines could be forced to lower internal criteria and hire applicants with questionable skills or spotty training records.

"It certainly will result in challenges to maintain quality," said John Marshall, an independent aviation-safety consultant who spent 26 years in the Air Force before overseeing Delta's safety. "Regional carriers will be creative and have to take shortcuts" to fill their cockpits, he said.

Ahead of the new 1,500-hour rule, the Regional Airline Association has been testing its first officers regularly in preparation for meeting the standards, said Scott Foose, the trade group's vice president of operations and safety. "Working collaboratively with the FAA, hundreds of first officers have already received their new certificates and the rest are on track to obtain theirs," Mr. Foose said.

The military hasn't been a major source of commercial pilots for years, and the supply of new pilots has been dwindling. Among the reasons is that would-be fliers face expensive training with no guarantee of being hired by an airline once they complete it.

Third Coast Aviation, a flight school in Kalamazoo, Mich., said business is down 30% to 40% over the past five years. At California Flight Academy in El Cajon, Calif., the rolls are full, but almost entirely with foreign students who will soon return to their home countries. "We don't have locals learning to fly anymore," said Ash Dakwar, the academy's operations chief.

While no one tracks overall attendance at the nation's 3,400 flight schools, FAA data show annual private and commercial pilot certificates—both required to become an airline pilot—are down 41% and 30%, respectively, in the past decade. The National Association of Flight Instructors, in a research paper published this year, said that "there is no feasible way…to continuously supply qualified pilots for the demand of air carriers."

Congress's 2010 vote to require 1,500 hours of experience in August 2013 came in the wake of several regional-airline accidents, although none had been due to pilots having fewer than 1,500 hours.

Regional carriers now are racing to make sure their pilots have 1,500 hours by next summer, while also trying to bolster their ranks. But prospects with close to the required number of hours aren't numerous. "These people just don't exist," said Mr. Garton of American Eagle.

The FAA is trying to soften the blow. It has proposed a rule that would lower the requirement to 750 hours for military aviators and 1,000 hours for graduates of four-year aviation universities. But the exemption, if it goes through, may come too late, and it isn't expected to help most aviators in training anyway, because they come from other types of flight schools.

For them, the challenge of meeting the new requirements is uncharted and costly. "I'm stuck being a flight instructor for another year," said John Adkins, a 27-year-old pilot at California Flight Academy. He achieved the current minimum for being a co-pilot, but the new rule has delayed his dream to join an airline. "You don't make a lot of money as an instructor," he said.

The 1,500-hour mandate "has only discouraged a future generation of prospective pilots to pursue this career," said Mr. Cohen, from the regional airline group. Those who persevere "will try to get the 1,500 hours the fastest and cheapest way possible," he said. "Flying around in empty airspace or towing banners doesn't give you the training you need to fly a complex airplane."

The last big pilot shortage, in the 1960s, occurred because "everybody who was of a trainable age was in Vietnam," said Randy Babbitt, a former FAA administrator who was hired as a pilot in that era. Meanwhile, airlines were expanding as jets shortened trips and boosted traffic. Once the military pilots finished their tours, many joined airlines and the shortage problem receded.