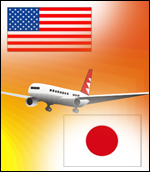 The United States and Japan have signed a Memorandum of Understanding (MoU) on Open Skies air transportation that will vastly expand international passenger and cargo flights between the two countries.

The MoU was inked in Tokyo by U.S. Ambassador to Japan John Roos and the Japanese Minister for Transport & Tourism Sumio Mabuchi.

Provisions of the MOU will be incorporated into an agreement on Open Skies to be concluded between the two governments through an exchange of diplomatic notes, the U.S. State Department said.

The agreement will strengthen and expand "our already strong trade and tourism links with Japan," it added.

Liberalizing U.S.-Japan air services for the carriers of both the countries benefits air travelers and businesses on both sides of the Pacific by expanding air service and encouraging vigorous price competition by airlines, while safeguarding aviation safety and security.

Achieving Open Skies with Japan, a major U.S. transportation and trade partner, has been a long-standing U.S. goal.

Once the agreement takes effect, American and Japanese consumers, airlines and economies will enjoy the benefits of competitive pricing and more convenient service.

Under the new pact, airlines from both the countries would be allowed to select routes and destinations based on consumer demand for both passenger and cargo services, without limitations on the number of U.S. or Japanese carriers that can fly between the two countries or the number of flights they can operate.

It would remove restrictions on capacity and pricing, and provide unlimited opportunities for cooperative marketing arrangements, including code-sharing, between U.S. and Japanese carriers.

Although the 1952 U.S.-Japan aviation agreement was greatly expanded in 1998, many U.S. carriers serving Japan were still subject to restrictions on capacity, routing, pricing and code-sharing.

Once the agreement is finalized, Japan will become the 95th U.S. Open-Skies partner.

In addition to bilateral Open Skies agreements, the United States has negotiated two multilateral Open Skies accords: the Multilateral Agreement on the Liberalization of International Air Transportation (MALIAT) with New Zealand, Singapore, Brunei, Chile, Samoa, Tonga, and Mongolia; and the 2007 Air Transport Agreement with the European Community and its 27 Member States.