By Thibaut - October 05, 2010
MANILA, Philippines - What started as a local airline's effort to "make people interested, showcase homegrown talent and raise morale" has become a huge Internet sensation picked up by news organizations across the globe.

The YouTube video of Cebu Pacific's dancing flight attendants, which was uploaded last Thursday, now has over 6 million views and was featured in the online platforms of CNN, Time Magazine, The New York Times and The Daily Mail, among many others.

"Lady Gaga is on board in spirit, and she's part of the safety demonstration -- how to put on your seat belt, how to put on the oxygen mask if needed," the CNN wire staff wrote.

It was also picked up by PerezHilton.com, a popular celebrity gossip website. 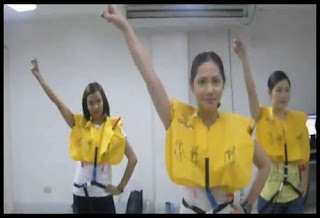 Most netizens commended Cebu Pacific for having "pretty flight attendants" and "nice (dance) moves," while others scored the Gokongwei-led airline for "not taking safety lightly" by not providing clear safety instructions and allowing electronic gadgets such as video cameras to be used inside the aircraft.

Cebu Pacific has reiterated that its flight attendants did not do the dance routine against their will, adding that they "volunteered" and "enjoyed" doing the said performances.

The airline added that the dance does not replace the serious safety demonstration as required by the Civil Aviation Authority of the Philippines (CAAP).

("We'd like to make it clear that we're still doing the serious safety demonstration along with the dance routine to inform our passengers on the things that should be done in emergency situations. Doing it twice actually makes our passengers remember the procedure more clearly.")

For her part, Cebu Pacific vice president for marketing Candice Iyog said in a text message to abs-cbnNEWS.com, "Cebu Pacific management and its employees have a very healthy relationship, which helps promote this fun culture." 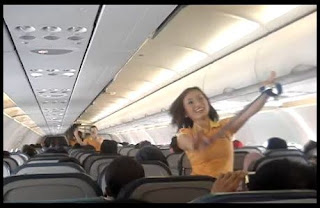 In an earlier interview with abs-cbnNEWS.com, Iyog revealed that the airline tapped the help of professionals to come up with the routine and has trained at least "2 sets of cabin crew" for it.

On October 1, a day after the viral video was uploaded, another clip of females dancing to the same routine made it to YouTube.

They carried the same seatbelts, life jackets and oxygen masks -- it was a video of a rehearsal done by Cebu Pacific's flight attendants.

One of the girls in the video, the one wearing pink and black pants, is said to be the same person in the first YouTube clip, a number of Internet users observed.

"The one at the leftmost wearing pink at the first few seconds of the vid, I think she's that cute FA (flight attendant)," one YouTube user said.

Some blogs and websites have already identified the dancing flight attendant in the viral video as Karen Tracy Vitug, who is now considered by many as an overnight Internet celebrity.

Photos of Vitug were also uploaded to show proof that she is the flight attendant featured in the video.

"The famous girl in (the) Cebu Pacific dancing flight attendants video is Karen Tracy Vitug. Karen is one of the cabin crew on-board in that plane and the one dancing in front of the said video," Batangastoday.com wrote.

"(Vitug is) fondly called by her co-workers as Tracy," Pinoyambisyoso.com wrote.