Airlines stand to lose heavily should the euro collapse 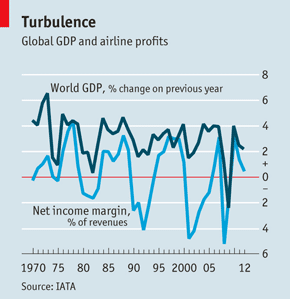 MEETINGS of airline bosses are rarely cheerful events, profits being tighter than leg room in economy. But this year’s annual gathering of the International Air Transport Association (IATA) should have been different. For a start, the airlines’ umbrella group picked the most promising market to host the pow-wow, which was held in Beijing. Not only is air travel booming within and from China, but the country’s airlines also made half of all global profits last year.

But as IATA delegates assembled for their gala dinner on June 11th at the Great Hall of the People in Tiananmen Square, there was a ghost at the feast. The topic on most people’s minds was not the dozens of airports to be opened this decade in China, nor the quarter of a trillion dollars the host country is spending to become an aviation and aerospace superpower. On the contrary, all eyes were focused on the spectre of financial chaos in Europe.

The euro zone’s troubles have already pushed many European carriers into the red. IATA predicts that there is a “serious risk” of bankruptcies. Indeed, Malev and Spainair, two fair-sized European airlines, have already gone bust. Several big airline groups, notably Air France-KLM, are trying to make deep cuts. The global industry’s after-tax profits are forecast to fall from $7.9 billion in 2011 to $3 billion this year; that is just 0.5% of revenue (see chart). And if the euro collapses? “It would be worse than 9/11,” says Willie Walsh, the boss of IAG, which owns British Airways and Iberia.

Things feel all the worse because 2012 might otherwise have been a good year. Oil prices have moderated of late. Global passenger traffic has risen by 6%, faster than the long-term trend. Freight contracted in 2011, but is reviving in many markets (though not Asia). Asset utilisation is 79%, up from 74% in 2009. Planes are relatively full, especially in America.

That said, the industry faces three risks besides a European meltdown. First, an oil-supply shock—resulting from an Iranian crisis, say—would send fuel prices sharply up again and wipe out profits. Some airlines, including KLM, are investing in biofuels, but full commercialisation looks a decade away. Others use financial hedges, but these are pricey and can backfire if oil prices drop. Delta is even now finalising a deal to buy an oil refinery.

The second risk arises from the flood of new planes due to be delivered shortly. Production snags at both Airbus and Boeing have kept capacity tighter than planned. If everyone uses their new planes to expand capacity, rather than to replace clunkers, there could be a lot of empty seats.

The final threat pits ghost against host. The European Commission’s inclusion of greenhouse gases from aviation in its emissions-trading scheme (ETS) is opposed by over 30 countries, of which China is the most defiant. If a compromise is not found, European countries must levy hefty fines on offenders and may seize aircraft—which could set off a trade war. On June 12th the China Air Transport Association, which represents Chinese carriers, said that China would retaliate with similar measures.

The Chinese government has forbidden its airlines from participating in the ETS. It has even threatened to cancel orders placed by its airlines with Airbus. No coincidence, then, that this week’s banquet was paid for by the European aircraftmaker. The Chinese appear unbowed.