Airlines' Profit Amounts to Revenue from 1 in 100 Passengers

By Thibaut - June 14, 2012
Executive Summary
If a U.S. airline collected $16,400 in fares and fees for a typical (hypothetical) domestic flight, just $164 of that would become profit, according to an analysis by US Airways and Oliver Wyman for the Wall Street Journal. In other words, if there were 100 passengers, the total profit would be represented by just one traveler's fare and fees. Fuel costs would eat up the revenue from 29 passengers; salaries, 20; ownership costs, 16; government fees and taxes, 14; maintenance, 11; and "other" costs, 9. 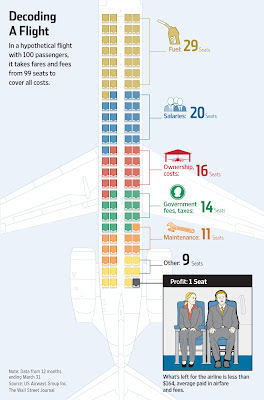 On an airplane carrying 100 passengers, how many customers does it take, on average, to cover the cost of the flight?

The Middle Seat asked US Airways and consulting firm Oliver Wyman to crunch airline expenses down to the percentages that an individual passenger pays, taking a hard look at costs of running an airline. US Airways created a hypothetical flight of 100 passengers. Each one paid the average $146 fare for a domestic flight ($292 round-trip), plus $18 each in fees and add-ons, based on a year's worth of data ending March 31. The bottom line: There is very little wiggle room on the plane for profit.

When you buy an average $292 domestic airline ticket, what are you really paying for? Scott McCartney on Lunch Break has details and explains why the profit for some airlines can come down to a single passenger. Photo: AP.

Somebody on every flight helps cover crash insurance and compensation paid for bumped passengers or lost luggage. The person beside you on your next trip may be partly paying to repair baggage carts or to buy and maintain passenger oxygen and defibrillators.

"It's like a wristwatch. You only see the face and hands, but all the parts inside are really necessary," said former airline chief executive Gordon Bethune. "Those bags don't get downstairs by themselves. All those things that move bags have to be purchased and then they break. It never stops."

Fuel now is by far the biggest cost for airlines—greater than even airline salaries. On that 100-passenger US Airways flight, the tickets and fees of 29 people pay just for the fuel to make the trip. (Salaries are the second-highest cost, with 20 passengers covering personnel paychecks.)

Oliver Wyman's research pegs fuel costs at an even bigger percentage of costs for the airline industry as a whole. Bigger carriers with longer flights tend to spend a bigger portion of their money at the fuel pump. The industry spent more than 34% of its revenue on fuel—it takes the fares of more than one-third of passengers on a flight, on average, to pay for the gas.

Airline gas mileage has improved over the years, the result of filling more seats on each flight, replacing multiple trips on small planes with fewer trips on larger aircraft and replacing older planes with newer, more fuel-efficient jets. In 2000, U.S. airlines burned 28.6 gallons of jet fuel per passenger, according to the Bureau of Transportation Statistics. Last year, that improved to 22.5 gallons per passenger. The industry is using less fuel but carrying more passengers. But the fuel bill tripled—airlines spent $32 billion more on fuel in 2011 than in 2000.

After fuel and salaries come ownership costs—buying and leasing planes. That includes the cost of spare engines and insuring planes in case of accidents. In the hypothetical 100-passenger flight, 16 people cover these costs.

Another 14 passengers cover the collective federal taxes paid by passengers, US Airways calculated. That money helps fund the Federal Aviation Administration, plus the Sept. 11 security fees that cover much of the cost of Transportation Security Administration screening, and facility charges that most airports add to tickets. Fuel taxes paid by airlines are counted with other fuel costs. In the end, passengers pay more in government taxes and fees than they do for baggage fees and other add-ons.

Total maintenance costs equal 11 passengers on the plane of 100, according to US Airways, which built its own repair shop in Philadelphia just for the trucks, baggage carts and the tugs that haul them. That is a tiny part of all the airline's maintenance responsibilities. Planes' parts often break. Every few months they undergo routine maintenance. Every few years more intensive maintenance is performed. And once every five or six years planes literally get taken apart and put back together.

Cost of 'Free' Soft Drinks
Nine passengers cover the "other" category—everything from catering (the soft drink you get free on most, but not all, carriers) to compensating passengers for bumping them from flights and paying to deliver or replace lost baggage. Food costs—mostly for first-class meals—add up to less than 2% of airline costs, according to Oliver Wyman's research. Rental fees for airport gates and ticket counters also factor into the big "other" category. So do regular business things like advertising and legal fees.

Landing fees eat up more than 2% of airline revenue, according to Oliver Wyman, so that it takes two passengers out of 100 to cover the use of airport runways and taxiways. Airports charge airlines by the weight of the airplane.

With 99 passengers accounted for, what does that leave the airline in terms of profit? One passenger.

"It's not exactly one, but we rounded up," said Robert Isom, chief operating officer at US Airways Group Inc.

Airlines don't have some of the expenses of other industries. Research and development is virtually nonexistent—innovation tends to come from airplane makers, seat makers or other businesses that supply the carriers. While airlines have lots of inventory expense, it isn't like what Boeing Co. BA -0.19% or other manufacturers encounter.

The Weather Variable
But airline operating costs are off the charts compared with other industries. In a business where much of the work is done outside, routine storms can eat into margins. And there are many moving parts to flying people through the air, and many safety costs required by regulation.

While ticket revenue pays the bulk of these costs, "ancillary revenue" supplements the flight by another $18 per person on a 100-passenger flight. That includes fees for checked baggage, seat assignments, ticket penalties and revenue from cargo.

It's these myriad fees that can be most maddening to passengers—customers who now pay higher fares yet feel like they're getting less service. But these fees, in part, offset the expense of operating an airline.

"It's a crazy business," Mr. Bethune said. "There are so many costs you could never articulate it all."