Where are the world's busiest airline routes? 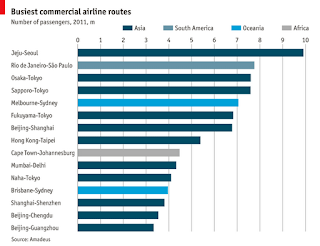 JEJU, on the South Korean island of the same name, is not one of the country's 20 biggest cities. Yet the island's allure as a domestic tourist destination resulted in 9.9m passengers flying between Seoul and Jeju (in either direction) in 2011. This makes it the busiest airline route in the world, according to Amadeus, a company that provides technology to the travel industry. It measures the cities where passengers start and finish their journeys, so while the busiest actual flight corridor in America is New York-Chicago, it only counts as the third-busiest American route because many of the passengers are connecting to other destinations. It comes just behind New York-Fort Lauderdale (3.1m) and New York-Los Angeles (3m). The number of people travelling between Asia and North America, and between Asia and Europe grew by 9% from 2010 to 2011, but as the chart shows the busiest routes are still domestic. The most popular international route is Hong Kong-Taipei, followed by Seoul-Tokyo (3.1m) and Jakarta-Singapore (3m).