787: Taking a trip on the new Dreamliner

By Thibaut - May 13, 2012
It's roomy for passengers, a delight for pilots, but on a promotional flight, some of the more-hyped features of the 787 were hard to detect. And my, how those wings can flex. 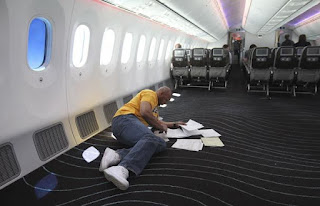 Looking out the unusually large windows of a 787 Dreamliner in flight Friday, the distinctive upward flexing of the slender carbon-fiber plastic composite wings that's visible from the ground was too gradual to see. Yet when we hit turbulence in flight, those sleek-as-scimitar wings moved dramatically, almost alarmingly.

The pilots, though, were not perturbed.

In the exceptionally quiet cockpit, they raved about how the new jet makes their jobs easier.

They demonstrated that even with one engine shut off, the plane virtually flies itself, hands-free.

Meanwhile, in the back of the plane, passengers enjoyed lots of overhead space, more light, and, with the latest seat designs, more knee room — all combining to give the cabin a much-less claustrophobic feel than on other airplanes.

On a three-hour domestic flight, other cabin improvements much touted by Boeing were hard to detect.

The engines were still noisy and the air still dry. Ears still popped just a little on takeoff. And when we hit that turbulence, a storm front out of Texas, the ride briefly got so bumpy it was difficult to stand.

The Friday flight from Washington, D.C., to Dallas, the latest leg of a Boeing promotional tour to market its newest jet, still resembled a workaday airplane flight more than some dreamy new experience.

The Dreamliner's charms should be more apparent on the long flights of 10 hours and more it is designed to fly; no U.S. airlines plan to fly it on domestic routes. And even on long-haul routes, said John Wojick, Boeing's jet sales chief for North America, passengers may just feel better without really knowing why.

Heather Ross, however, does know why.

The Boeing test pilot who flew the jet Friday, Ross has more than 1,000 hours of 787 flying time behind her. She enthusiastically affirms the benefits of that higher cabin pressure and higher humidity when she pilots, say, a 14-hour flight to India.

"You don't feel like you've been beaten up," said Ross. "You're not dry and thirsty all the time." 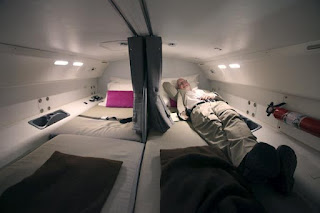 When the plane was cruising at 38,000 feet, Ross showed the cabin-pressure reading on the instrument panel set initially to the equivalent of 5,400 feet, just over a mile high. That's just about the same as the air you breathe in Denver.

Later in the flight, with the approaching storm that brought torrential rain to the central U.S., the pilots climbed to 43,000 feet to try to fly over the weather. The cabin air thinned to the equivalent of 6,000 feet — the lowest pressure it will likely reach in a 787.

When the turbulence grew worse, Ross switched tactics and decided to dive to 30,000 feet to look for a smoother ride under the weather. The cabin pressure dropped to just a 3,700-foot equivalent.

We did escape the turbulence, but none of the cabin-pressure shifts were readily perceptible in the coach seats.

(Boeing did not allow The Seattle Times to measure sound, humidity and cabin pressure on board independently with its own meters. A spokesman said engineers were concerned that "the instruments would not provide an accurate portrayal of the cabin environment.")

Blake Emery, the Boeing director who drove the 787 cabin improvements, said the company's research showed passenger discomfort on today's regular flights — where the air pressure at high altitude is typically set to the equivalent of about 8,000 feet — shows up in the form of headaches, muscle cramps, and feelings of fatigue after three to five hours.

Boeing is able to pressurize the cabin more because the composite plastic fuselage can better withstand the constant up-down cycle of pressure changes. 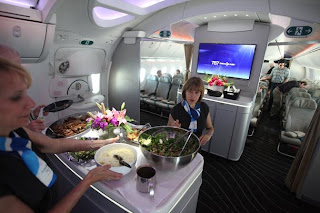 Also aboard the flight Friday was Randy Neville, 787 chief test pilot, who was previously Boeing's chief test pilot for the F-22 — a Lockheed Martin jet fighter for which Boeing built the wings and aft fuselage.

Neville said the 787 provides the smoothest ride of all Boeing airplanes because its complex flight-control computers constantly work to counter any disturbance to the path set by the pilots.

That's the regular 787 flight-control system. An additional technology designed to damp the effect of wind gusts and smooth the ride further is not yet in place, awaiting a software upgrade sometime in the next year.

Ross and her co-pilot Mike Bryan deliberately did nothing, keeping their feet off the pedals and their hands off the steering column, yet the airplane did not move perceptibly.

The jet's flight-control systems kept it on the course the pilots had commanded, compensating automatically for the sudden asymmetric thrust.

An engine going out is normally a stressful event for a pilot.

But Neville said the 787's flight-control system turns "a dynamic event into something very benign."

"It won't let it roll, even if your hands aren't on the wheel, because you haven't commanded a roll," he said. "It takes the work away for the pilot." 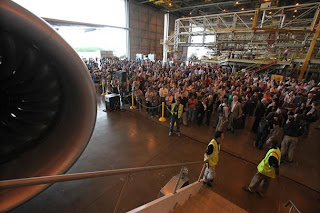 The autopilot also handled and flew through the turbulence.

Paul Clement, test director on Dreamliner No. 3, the test plane flown Friday, said that while the movement of the wingtips during the turbulence might seem wild to a passenger viewing it for the first time, it's the way the wings are designed to respond.

Aluminum wings are much stiffer than the 787's carbon-fiber wings and would move much less. But Clement said the carbon-composite material is tougher as well as more flexible.

He compared the way the wings moved with the turbulence to the shock absorbers on a car, which you want to be springy so that you don't feel every bump in the road.

"The flex absorbs some of the turbulent energy," Clement said.

The plane landed at Dallas-Fort Worth to a water-cannon salute and a welcoming crowd of about 600 American Airlines employees.

American CEO Tom Horton, speaking at the Dallas ceremony, pronounced the 787 "a glimpse of the future" for his airline.

Despite his optimism, that future still hangs in the balance. American Airlines is in bankruptcy and creditors are weighing Horton's recovery plan against a merger with US Airways, an option favored by the airline's unions.

American's 787 order, placed in 2008, was never finalized, awaiting agreement with its pilots' union. The pilot contract is expected to be voided soon in bankruptcy court and American is then expected to make the order firm.

The post-bankruptcy profitability of American will then rest squarely on those tough, flexible Dreamliner wings.