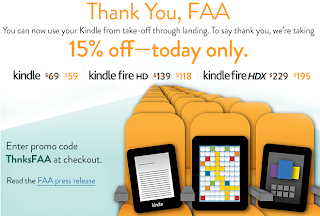 Consumers are not the only ones happy about the FAA’s recent decision to let passengers use electronic devices during nearly all phases of the flights. Amazon is marking the occasion with a one-day marketing ploy to offer consumers a discount on various e-reader devices.

In a Monday morning release, Amazon said “thank you” and offered a 15 percent discount on various versions of the Kindle Fire, as well as knocking $10 off its $69 basic Kindle.

“We’ve been fighting for our customers on this issue for years, and we are thrilled by the FAA’s recent decision,” said an Amazon executive in a statement.

The decision, announced on Friday, means an end to seemingly arbitrary rules that required passengers to power down their devices during take-off and landing, despite any evidence that devices like Kindles or iPads have any effect on planes’ navigations systems.

As my colleague Kevin Tofel explains, the new rules mean passengers can pretty much use their devices as they like (except for voice calls), but that the new policies will go into effect on an airline-by-airline basis.