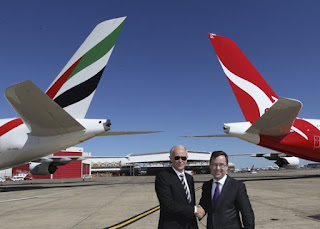 Struggling Australian carrier Qantas has inked a 10-year partnership with Emirates that will see it transfer its hub for European flights from Singapore to Dubai from April next year in a bid to boost business.
Qantas said its daily Airbus A380 services to London from Melbourne and Sydney will transit via Dubai's Terminal 3, the world's only purpose-built A380 terminal.
"This is a partnership of independent peers, based on shared standards and aspirations," said Qantas CEO Alan Joyce at a joint press conference with Emirates President, Tim Clark, in Sydney Thursday.
"We have agreed to join forces to give our customers the most comprehensive premium travel experience on the planet.
"We will be poised to deliver the best in networks, frequencies, lounges, loyalty programs and customer experience."
The deal will not involve equity investment on either side, he informed.
The 10-year tie-up is part of Qantas's move to turn around its fortunes after it last month posted its first annual loss since privatisation in 1995. It posted $256 million for the year to June 30.
The move was welcomed by the market with Qantas shares rallying nearly five per cent to Aus$1.17 by early afternoon.
According to Joyce, the new partnership would especially benefit its frequent flyers, with the airlines offering reciprocal access to tier status benefits, including end-to-end recognition of customers, lounge access and priority check-in and boarding.
Earlier this month, Qantas announced its first annual loss since being privatized and also scrapped an order worth $8.5 billion for 35 Boeing 787 Dreamliner jets. Emirates, which has also been hit by rising fuel costs, welcomed the deal.
"The time was right for developing a long term, future forward partnership with Qantas, the iconic Australian airline," Clark said.
The deal includes coordinated pricing, sales and scheduling and a benefit-sharing model, although neither airline will take equity in the other.
For Emirates customers, the alliance will open up Qantas's Australian domestic network of more than 50 destinations and nearly 5,000 flights per week.
The arrangement, which requires approval from Australian regulators, is expected to start in April 2013.
Shares in Qantas rose by almost 5% on news of the alliance.